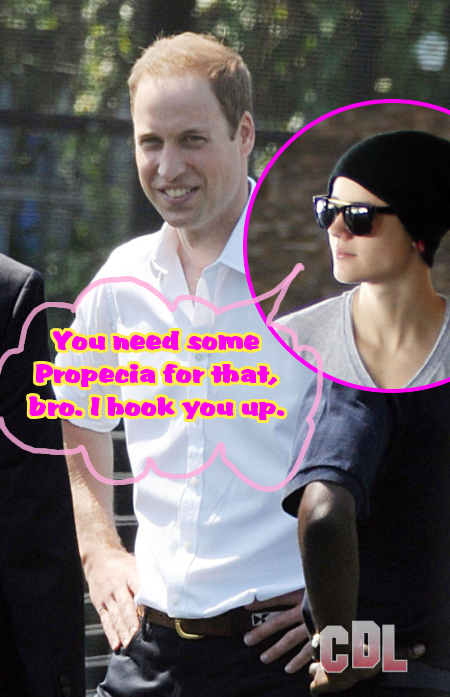 Justin Bieber is running his lil’ Bieber mouth again, and this time he’s blasting Prince William‘s quickly thinning hair. Justin says that Prince William should be ashamed of his hair and should immediately invest in some products to counteract that receding hairline of his. In other words, the Beebz doesn’t think bald people are beautiful.

Bieber recently had an interview with Rollacoaster Magazine, a UK publication. As TMZ reports, the interview (somehow) prompted bratty Bieber to comment on Prince William’s hairline, to which he responded, “I mean, there are things to prevent that nowadays, like Propecia.” Bieber adds, “I don’t know why he doesn’t just get those things, those products. You just take Propecia and your hair grows back. Have you not got it over here?”

Oh, Bieber. Since when did you get your degree in medicine? I don’t think being a teen pop sensation exactly qualifies you to be prescribing medications to royalty — or anyone for that matter. Perhaps Prince Will simply has his priorities placed elsewhere. Hey, Kate Middleton obviously doesn’t seem too bothered by it — she did marry the guy. Though, maybe Kate secretly feels the same way about her current husband . . . is she in love with someone else?

Prince William hasn’t yet released a response to Justin Bieber’s comments, and I’d be surprised if he does. I wonder how many fans Bieber will lose after coming out with his public disdain for the bald folk in this world? Fortunately for him, I don’t think there’s a large bald demographic in his current fanbase. However, there are certain things you don’t do in this world, and one of those things is blatantly attack a Royal’s hairline! Low blow, Beebz. Low blow.