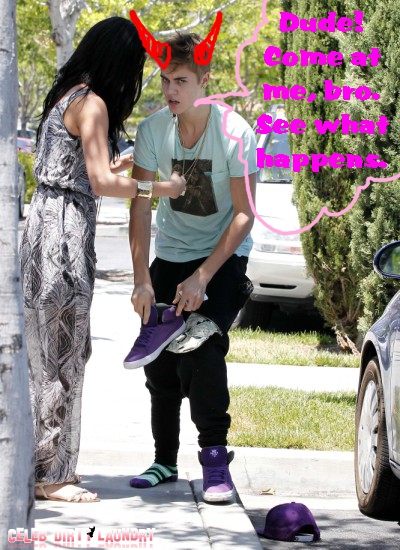 Just days before he got scrappy with an overzealous photographer, our lil’ pal Justin Bieber had a play date with Mike Tyson. Obviously, Tyson taught the Biebz a thing or two because, as CDL reported earlier, Justin is now facing criminal battery charges and will soon be questioned by authorities.

While Justin was working out with Tyson, he received a few boxing tips and fervent support from the borderline crazy fighter.  In the TMZ video that I can’t help but laugh at, you can see Justin going into full on Bruce Lee mode against an innocent punching bag, which Tyson is holding. Though, I’m not sure why Tyson is holding it, because I’m pretty sure that it’s not going anywhere — at least with Justin punching it.

Justin’s wimpy little arms fly everywhere as Mike chants, “Come on, JB! Come on, JB!” Justin eventually gets tired and has to stop at the end of the forty-five second video. Justin seemed really excited about punching that bag — I think he might have some pent up aggression flowing through those Canadian veins. All I can say is . . . watch out, world! 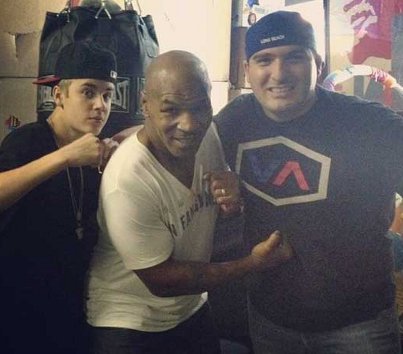 What do you make of J-Biebz’s current streak of violence? Do you think, perhaps, he’s trying hard to act tough so as to abolish the “teenage heartthrob” image he’s made for himself? Or do you think he’s just getting fed up (and he has all the reason to be) with annoying, pesky photographers who think they can just weasel their way into every aspect of his life?

I understand he’s probably sick and tired of the paparazzi, but this is the life he signed up for. While I don’t agree with how some of these stupid photographers act, it’s still not okay for celebs to lash out at them with physical acts of violence. There’s still a lot of — what I like to call — ALLEGEDALITY surrounding this situation, so I’ll be interested to see what becomes of it.

Do you think The Beebz’s attack was as bad as people are making it out to be? TAKE OUR POLL — because I simply love polls — and tell us what you think!