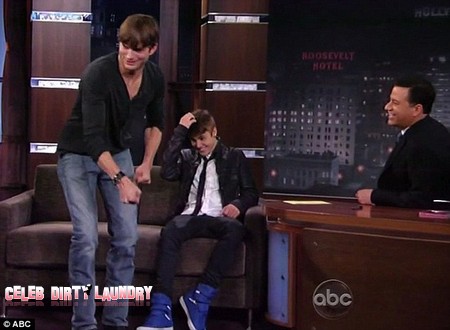 Justin Bieber is not known to be a hard-hearted man but the teen idol wants to see Taylor Swift break down and cry!  It seems that Justin doesn’t want to break Taylor’s heart – he still loves Selena – but he chose Taylor as his first victim on ‘Punk’d’ just so he could make her cry.

Justin plays a huge prank on Taylor in the new version of the MTV show which airs tomorrow Thursday and he admitted she was the perfect target because she is sensitive.

Speaking on ‘Jimmy Kimmel Live’ Justin said:  “I am the first in a series of rotating celebrity hosts and I pranked Taylor.  I wanted to think of something that would really make her cry and she’s so sensitive and I knew that if she thought she ruined a wedding she’d be devastated.”

“Basically she thinks she’s putting off fireworks that I got her in Japan and they blew up this boat that had a wedding on it and she was flipping out. The bride was swimming into shore and it was crazy.”

Justin said:   “For this Punk’d thing that we’re doing, he’s the master. I’ve always been a prankster and I love the show so it’s great to get to do it.”

Hopefully Justin will not start looking to Ashton for relationship advice.  Can you imagine Justin cheating on Selena the way Ashton screwed around on Demi?  Let’s hope that Justin restricts his admiration for Ashton to his practical joking skills.