Justin Bieber Was a Major Douche Bag in London 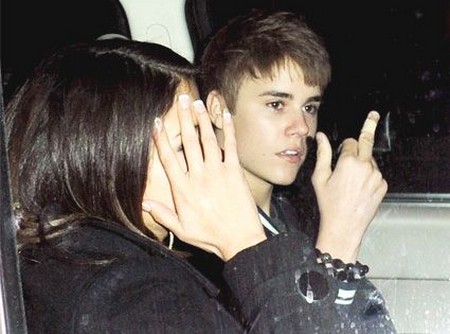 Justin Bieber was in London, England for one reason, to simply premiere his new album and while there ended up just being a total douche bag by insulting the locals accents, the country and ending it with just whining and complaining.

As Justin got on stage, star of The Voice UK, Reggie Yates offered Justin a seat on stage to which he replied, “No, I want to introduce my song.” Talk about being incredibly rude and in front of many fans as well, what a stupid move.

After about three songs in they had to cut ‘All Around The World’, because Justin started whining about the sound system saying, “It sounds bad!” Another checkmark on the tally of douche baggery, nice move Justin!

Reggie brought up the question on how Bieber felt on being compared to Justin Timberlake on his new single ‘Boyfriend’ and he answered, “I sound nothing like Justin Timberlake” and arrogantly introduced his next song ‘As Long As You Love Me’ saying, “It’s a really, really, really good song.” Adding “But it’s probably gonna sound like crap through these speakers.” Another point to Bieber, he just keeps digging his grave.

As his song ‘Be Alright’ came on the little brat started explaining his inspiration for the song saying, “I was in some random country,” and his manager interjects with “Indonesia.” He can’t even remember the country where he gained inspiration for in this song? Indonesia happens to be the 4th most populous country on the planet.  Just pathetic, but it goes on, he then says, “I recorded it in a studio, some little place. They didn’t know what they were doing.” Not only does he insult the people of England but also Indonesia, that’s two points right there!

Then Justin was asked if he would talk about his relationship with his girlfriend Selena Gomez and he said, “I’ll talk about everything. I’m going to put it right out there, sex and everything.” Now he’s just acting so childish, to me it feels like this could be insulting to Selena as well.

Finishing this huge disaster Reggie had some questions from the assembled hacks for Justin, He actually answered in an English accent and told Reggie, “It’s ‘think’ with a ‘th’, not an ‘f’.” How much of an idiot is Justin!? You just insulted this guy’s accent, there’s no way in hell that that would ever be considered funny and with his whining throughout the whole premier, everyone else would have felt that he was also being a little brat.

Justin Bieber has no respect, and how much do you want to bet that those speakers had nothing wrong with them. The fact is that this little joke of a brat just can’t sing. Who cares about how many charities he helps, a douche bag is a douche bag and he proves to be overly recognized as one.