Justin Bieber’s Bodyguard Knocks Out Photographer With One Punch (Photo) 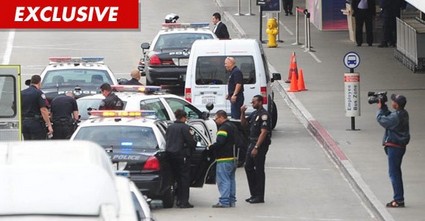 Don’t mess with Justin Bieber – at least not when his protectors are around – one of his bodyguards knocked out an aggressive photographer with just a single punch. The bodyguard is a former Israeli soldier and they are the best – just ask the pushy creep who was harassing the Biebs!

Justin had just landed at LAX and was getting into an SUV preparing to leave the airport when a pesty photographer stepped in front of the vehicle and starting taking photos. The bodyguard with the knockout punch asked the photog to move – to get out of the way of the car – but he refused and continued taking pics. What a jerk!

The bodyguard attempted to escort the dude out of the way and usher him to the sidewalk so that Justin’s car could leave. That’s when the clown decided he’d take a swing at the bodyguard – bad move! The pro just ducked and then knocked the creep out with a single punch. Now that’s what we call a bodyguard.

One really has to be stupid to try to punch a professional bodyguard – these guys are highly trained to protect their charges from much worse. They laugh at such things.