Kanye West Gives Kim Kardashian A Difficult Ultimatum: “It’s Me or Your Mom!” 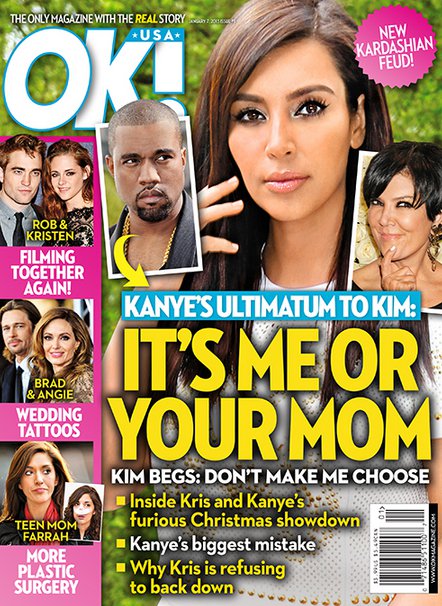 Kanye West has presented Kim Kardashian with a rather difficult ultimatum. He wants her to choose between him or her mother, Kris Jenner. Now, we know Kanye West has a big mouth and likes to be the center of attention, and there’s no doubt he likes to be in charge, so it’s only safe to assume that he and the Kardashian Momager Kris Jenner clash. Kris has made it known over the months while they were together that they get along fine with Kanye West. But there’s always another side to the story, and if I had to bet on it, I’d say that Kanye West doesn’t exactly mesh with the Kardashian clan.

The story is presented on the cover of OK! Magazine, and the presentation is so incredibly dramatic it has my heart beating about three times faster that it normally does. “Kanye’s Ultimatum to Kim: “It’s Me or your Mom — Kim Begs: Don’t make me choose!” Dramatic, right? The magazine proceeds to list a series of points that illustrate the current state of this tumultuous relationship: “Inside Kris and Kanye’s furious Christmas showdown; Kanye’s biggest mistake; Why Kris is refusing to back down.”

This sounds like one, big, gigantic Kardashian disaster. The Christmas drama probably has something to do with the fact that Kris didn’t let Kanye West join in on the family holiday celebration by participating in the Kardashian family Christmas card. There are probably a load of other details that have fueled this fiery drama between the two. Kim is caught right in the middle.

Do you think the magazine is exaggerating the details, or do you think Kanye West and Kris Jenner are really going at it like two bulldogs? Check out the magazine and read for yourself, and also read about more Teen Mom plastic surgery, Brad Pitt and Angelina Jolie‘s wedding tattoos, and the prospects of Kristen Stewart and Robert Pattinson filming together again!