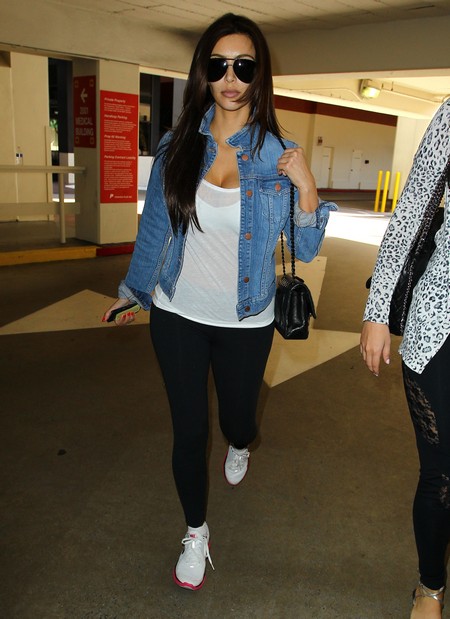 Kim Kardashian has nailed another victim as Kanye West will appear on the upcoming season of ‘Keeping Up With The Kardashians.’  Now we know why Kim and Kanye made so much noise about sleeping together – it’s all about about publicity for the TV reality show!

So I guess we can say that Kanye is the new Kris Humphries but without the fake wedding and rapid divorce!  Kim and her family of attention seekers, led by mercenary momananger Kris Jenner, will do anything for money.  Sleeping over at Kanye’s apartment was just another day’s work for Kim…

Is this the new plan of recruitment for Kim’s reality TV empire?  Sleep with them and they will perform for you.

As RadarOnline.com previously reported, Kim was snapped slinking out of Kanye West’s NYC apartment last Thursday morning wearing the same outfit she was wearing on her date with the hip hop star on Wednesday. Kanye has also released a song professing his love for the reality TV vixen.

The Grammy award winning hip hop star has already appeared on the Kardashian reality television franchise for E!, and has told Kim he would love to appear on the show again!

“Kanye is head over heels in love with Kim, and he has told her he would love to appear on the reality show if she wants him to. Kim is a bit leery of having her man appear on camera because of the whole fiasco with her soon-to-be-ex-husband, Kris Humphries, but watch for Kanye to make several appearances on the show towards the end of the season. Viewers won’t see him featured in the first part of the season, and it won’t be all about Kanye,” a show insider tells RadarOnline.com exclusively.

While Kanye says in his new song Theraflu that he “fell in love with Kim,” while she began dating Humphries, we reported back in January about their on-going hook up.

“They were both cheating,” Kanye’s ex Amber Rose exclusively told Star magazine. She said the pair hooked up while they were both in relationships with A-listers — Kim with NFL star Reggie Bush and Kanye with Amber!

“Kim feels extremely comfortable with Kanye because she feels that for the first time she is with a partner that understands what she does for a living and doesn’t scrutinize her for being in a reality show….She also doesn’t feel like Kanye is using her, like she did with Kris,” the source says.

After all, Kanye West will be a much bigger draw for the Kardashian/Jenner reality TV empire than dull old Kris Humphries.  Too bad Kim didn’t get him to agree to appear before her fake wedding – she could have saved poor Kris lots of trouble.  Keeping Up With The Kardashians‘ new season premieres Sunday, May 20 on E!

Will you be watching the new season?  Did Kim sleep with Kanye primarily to get him onto the show.  Let us know in the comments below.