Karashian Bombshell: O.J. Simpson Puts Khloe Kardashian In His Will 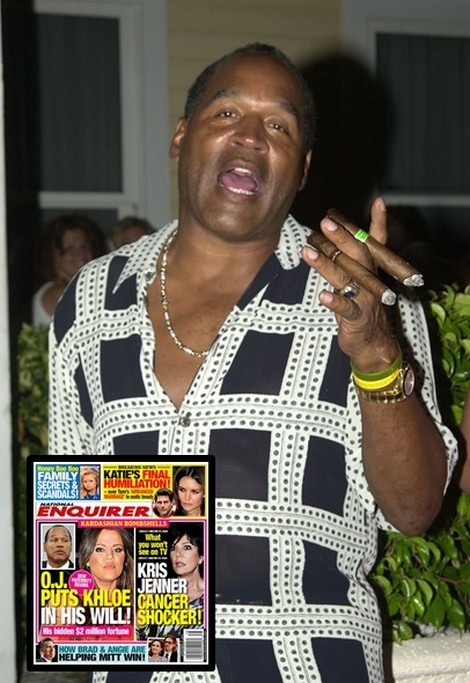 The current issue of National Enquirer features the Kardashian bombshell story “O.J. Simpson Puts Khloe Karadshian In His Will.”   In the January 2012 National Enquirer broke the story of why Khloe Kardashian beared no resemblance to her sisters Kim and Kourtney.   The reason according to the magazine was,  O.J. Simpson was her dad! It seems that O.J. had plenty of time to talk while he sits in jail for up to 33 years and the former NFL star let it slip that he had an affair with Kris Jenner.

Now not one to top searching for more dirt, Enquirer goes on to claim that there is more paternity drama and O.J. has actually put Khloe in his will.  It’s a good thing O.J. is in prison, when Momma Kris hears this he is in big trouble….watch out O.J. it’s not good to make momma Karadshian mad…just ask Bruce Jenner LOL…  Kris has admitted sleeping around on her husband at the time, lawyer Robert Kardashian, and he and O.J. were close buddies, so….  But she has denied all rumors of Khloe’s paternity being in doubt.

I am sure like me you assume O.J. has no money, so big deal, but wait, apparently he has hidden a whopping $2 million.  So Khloe is set to inherit!

In other news the magazine is also claiming this week that they have the story that won’t be seen on Keeping up With The Karadshians.  Apparently Kris Jenner has had a cancer scare and the famewhore of the century has surprisingly decided not to milk this info for all it is worth.  Why don’t I believe this?  We all know momma Kardashian is all about the $$$!

Enquirer also reveals how Mitt Romney intends to use Brad Pitt and Angelina Jolie as the bait to get him some big Hollywood stars to support and  donate cash to his campaign.

The ENQUIRER exclusively brings you ALL the details of Romney’s strategy and why the plan is sure to infuriate Brad and Angie – as well as reignite the volatile relationships they have with some of their closest relatives.

To find out all the details of the paternity drama surrounding O.J. Simpson and Khloe Karadshian and how O.J. intends to put her in his will and a whole lot more, pick up the current issue of National Enquirer.