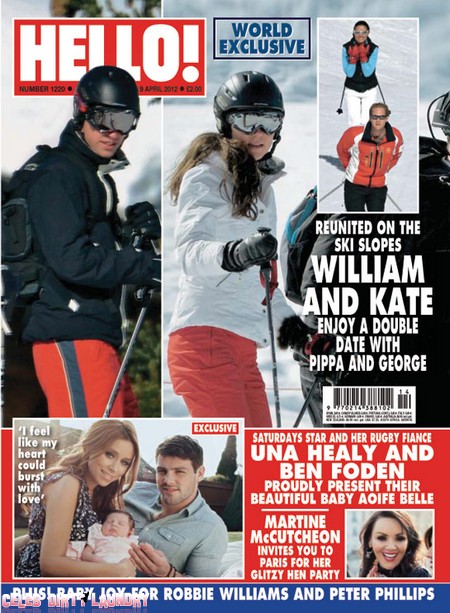 Kate Middleton and Prince William went public about their romance back in 2004 when William kissed Kate on the slopes during a skiing trip.  Now the royal couple are in the French Alps and appear more in love than ever before.

Adding media interest to the trip, Pippa Middleton and her presumed current boyfriend, George Dominic Percy, the eldest son and heir of the Duke of Northumberland, joined the royal couple.  This pretty well proves that George and Pippa are now a couple.

Hello Mag exclusively reports:  Whizzing down the ski slopes in the French Alps, the Duke and Duchess of Cambridge look delighted to be back together after a seven week separation.  The royal couple, who are both expert skiers, had nothing on their minds except enjoying the spring sunshine, perfect skiing conditions and precious time together in the French ski resort of Meribel.

They had a lot of catching up to do, exchanging stories about his tour of duty as an RAF Search and Rescue helicopter pilot in the Falkland Islands and her first solo official engagements.

These world exclusive pictures – which appear in this week’s HELLO! magazine – show William and Kate looking happy and relaxed as they escape into relative anonymity, hidden under ski suits, helmets and goggles.

They were joined on the trip to Courchevel, a picturesque, luxury resort popular with British holidaymakers, by the Duchess’ parents Michael and Carole, plus her siblings Pippa and James.  Also along for the holiday was Pippa’s friend Earl Percy.

The presence of George, the heir to a $500 million fortune as the son of the Duke of Northumberland, will undoubtedly add further fuel to reports that their friendship has recently turned to romance.   The French resort is the perfect place to relax before William and Kate face a busy summer, combining their usual duties with additional official engagements for the Queen’s Diamond Jubilee and a highly visible role as ambassadors for the London Olympics.

Kate – wearing a white ski jacket, red ski trousers and black mitts, and with her usually styled hair left loose and wavy – clearly enjoyed every moment of being reunited with her husband.  She and William may have recalled the sensation they caused on their first skiing holiday together in 2004 when the Prince kissed her on the slopes of Klosters, thereby telling the world of their hitherto secret romance.

It’s great to see our favorite couple looking so relaxed and happy – enjoying a well-deserved break from their hectic schedules.