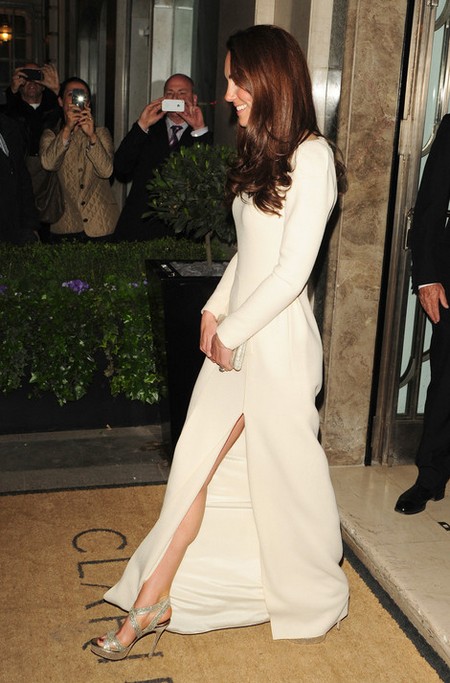 Kate Middleton wowed onlookers and stopped traffic while walking a red carpet at a private engagement this week.  With Prince William at her side, the Duchess wore a floor-length, cream colored confection that was split to her thigh.  The stunning gown was believed to have been designed by Roland Mouret and her crystal studded Jimmy Choo Vamp sandals accentuated her red toenails.

Kate and her husband William were attending a meeting of the Thirty Club – which is comprised of some of the most powerful people in advertising and the media – at Claridge’s hotel in Mayfair.  William was a guest speaker for the evening, following closely in the footsteps of Princess Anne and the Duke of Edinburgh.

“The Duke has been invited for around nine years now and thought that it was right to accept the invitation this year because of the Queen’s Diamond Jubilee.  It also seemed rather apt as it’s his 30th birthday next month.  Other senior members of the royal family also suggested that it was an interesting event to attend.” A St James’ Palace spokesperson said.

No word as to what the prince spoke on as the event was a private engagement.  Do you like Kate’s dress?  Do you think she went a bit too far?  Perhaps you think she should go further? Tell us in the comments section below.