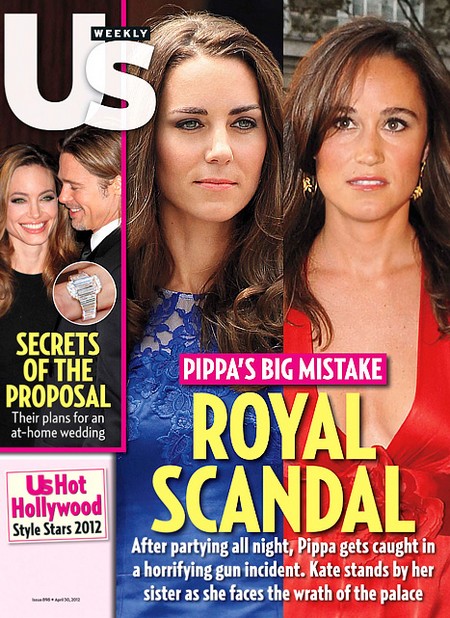 This week’s edition of Us Weekly has the cover story ‘Pippa’s Big Mistake: Royal Scandal,’ and a royal scandal it has become!  Pippa Middleton, now known as Pistol Pippa is in hot water with both her sister, Kate Middleton, The Duchess of Cambridge and Queen Elizabeth II, Prince William’s grandmother.  In fact, as we reported on CDL Kate and the Queen are thoroughly disgusted with Pippa.

Needless to say the royal in-laws are not pleased with Pippa’s wild behaviour. “This is embarrassing for them,” a royal source says.   Duchess Kate has been out of sorts with Pippa for some time over what Kate sees as Pippa’s taking advantage of her royal connection in terms of her and personal life.  Now the shocking photos of Pippa on the rollicking gun-waving wide have really driven Kate to distraction.  A source says that the photos: “have put Kate in a very difficult position.”

The man pointing the gun in the photos has been identified as Romain Rabillard, a 36-year-old French attorney, who represents German firearms manufacturer Heckler & Koch.  Rabillard hangs with a crowd of chic Parisians, including wealthy clothing designer Viscount Arthur de Soultrait, a BF of Pippa’s, whose wild 30th birthday party she attended Friday evening.

As Us Weekly reports:  Almost exactly a year after her sister Kate Middleton‘s royal wedding, Pippa Middleton is stealing the scene again — but it’s nothing as light-hearted as flirty chats with Prince Harry or a derriere-enhancing bridesmaids’ dress.

After partying at a raucous, raunchy bash in Paris until 5 a.m., the socialite, 28, took a spin with three pals in a convertible on Saturday when photographers snapped the foursome — and, in a bizarre turn of events, the driver of the car took out what appeared to be a semi-automatic pistol and aimed it at the photographer. Sitting in the passenger seat, Middleton laughed.

Nobody’s laughing now. As revealed in the new Us Weekly, Middleton will be questioned by French authorities about the gun-waving incident and faces nearly $6000 in fines and even jail time if convicted.

Poor Pippa – what is she to do?  Now there is no way any British aristocrat will touch her.  Perhaps she can try for Ashton Kutcher.  What do you think?  Let us know in the comments below.