Kate Middleton Worried Prince William Wants To Give Up The Crown 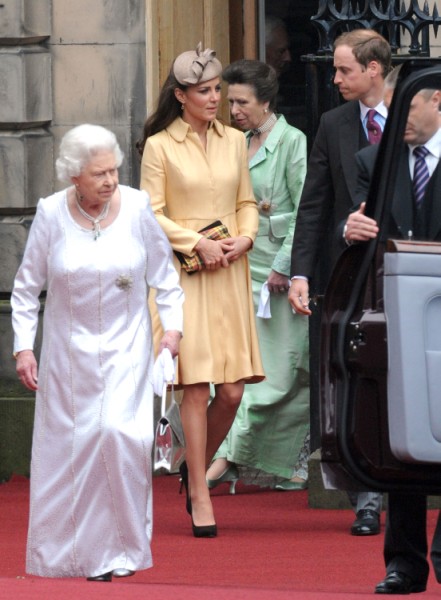 Ah hell to the no! I did NOT wait ten years for that tiara just so you could freak out over some naked booby scandal and give up the throne!

That’s how I image that conversation would go – only with British accents! Because no amount of princess training could possibly control Kate Middleton if Prince William decided to take after his great great uncle and hand his royal life back. We Americans sometimes get blamed for that one (thanks a bunch Wallis Simpson) but I’m happy to say the French are William’s current whipping boy! Apparently he’s still so p-ssed over Kate’s topless photo spread that he’s rethinking his role in the royal family.

“Wills tends to deal with difficult situations really well,” a source told Now magazine. “But this time he’s not only furious, the [scandal is] making him very reflective…. He looks at his cousins Peter Phillips and his sister Zara and envies the way they’re able to live their lives with ease. He hates the way everything he does is publicised. Kate can see how stressed he is with the situation.”

SETTLE DOWN WILLIAM! What is this kid’s problem? Life is not all tea and crumpets! Real people have real problems. My Wills is getting so broody and annoying. Basically he wants to be Pippa Middleton. William wants the royal perks but not the royal responsibilities. Grow a pair damn it! Kate was born for this, perhaps William wasn’t. The student has truly become the master, yes? A lot was made about the day William and Kate found out about the scandal while they were on tour. People said Kate had to calm him down and there’s this photo of him being all p-ssy and Kate putting a steadying hand on his back. She really does have a lot more control than people give her credit for which is why I’m so excited for her future. But we’re also learning a lot about Prince William here too. If you ever thought Kate was going to morph into media darling/fashion icon/center of attention Princess Diana, think again. William will never let that happen. I used to think it was because William wanted to protect Kate and not make a habit out of courting the media but now I’m not so sure. Clearly William likes to be in charge and he freaks out when things don’t go his way. He’s selling Kate and himself as a package deal. Kate the one woman show is not in the cards. After how he’s acted lately, Kate should be worried about that ever happening!

Do you think Prince William has a problem with royal life or the fact he can’t control his wife’s image? Is Kate Middleton worried of history repeating itself? Is there a small part of William that doesn’t want to get eclipsed like his father?