Kate Middleton’s Baby Drama: The Joy & Worry Over Her Condition 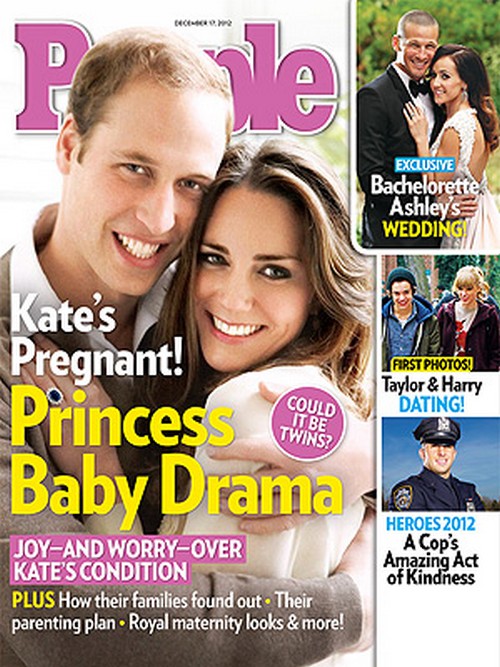 The current issue of People Magazine features the cover story, “Kate’s Pregnant! Princess Baby Drama.”  The Palace confirmed to the world December 3rd, 2012 that Duchess, Kate Middleton and Prince William were expecting their first child together.  It was also announced that Kate was not feeling very well well. The Duchess of Cambridge was taken to King Edward VII Hospital for acute morning sickness and is expected to stay and recuperate for several days.

Friends and family are thrilled by the new, but worried about Kate.  “There is a real excitement,” a royal source tells PEOPLE in this week’s cover story, “but obviously people are anxious about the Duchess.”

The couple wanted to keep the news secret a little longer, but Kate’s sickness forced them to let the cat our of the bag.  The pair are said to have waited to get pregnant until after William’s grandmother, The Queen’s Diamond Jubilee was over.

This week the magazine has all the details on how Kate and William’s family found out about the joyful news, their parenting plans and royal maternity looks.

Also included in this week’s magazine People has the first pictures of new couple Taylor Swift and Harry Styles on a date.  They have exclusive wedding photos of Bachelorette Ashley Hebert and J.P. Rosenbaum.

To find out much more about Kate Middleton and Prince William’s baby plans, their plans for a nanny, baby names and a whole lot more, pick up the current issue of People Magazine on stands Friday!