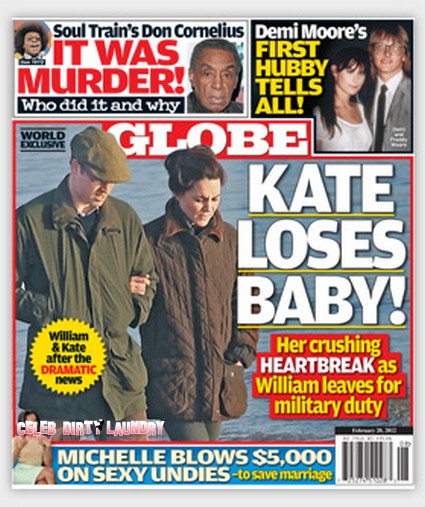 The current issue of Globe Magazine features the cover story ‘Kate Loses Baby!’  Ever since Kate Middleton and Prince William married in April rumors have swarmed about Kate being pregnant – with no announcement coming from the Palace to confirm the rumors.  Now Globe claims to have a world exclusive story that Kate and Prince William were not only expecting a child but they lost their first baby together.  They have all the details of Kate’s crushing heartbreak as William leaves for military duty and even claims to have photos after the couple received the bad news.

Globe  has the scoop: Prince William and his bride Kate are devastated after learning she lost the baby they desperately wanted. Read the details about the heartbreaking miscarriage, how Kate broke the shattering news to William and what palace insiders are saying caused the tragedy – only in the new GLOBE.

I am certain this story is pure speculation by Globe to sell more magazines.  William has been deployed to the Falkland Islands for a six-week posting with the British air force search and rescue crew.  It is highly unlikely that William would have left Kate if she had just suffered a miscarriage.  So there you have the story.  What do you think?  True of false?

Also included in this week’s issue the magazine claims that Soul Train star Don Cornelius was murdered! That’s the chilling conclusion of experts after the 75-year-old music icon was found fatally shot with no suicide note.

To found out all the details and more, pick up the current issue of Globe!