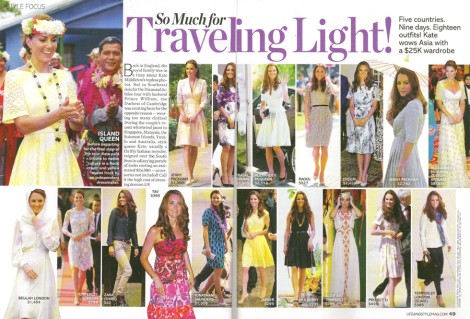 Prince William and Kate Middleton’s Diamond Jubilee Tour to the South Pacific started off with so much excitement and promise but scandals involving what Kate did and did not wear continue to cause problems.

Everyone remembers Kate Middleton’s booby scandal but now it turns out she angered an entire nation by wearing the wrong dress! While in the Solomon Islands, Kate wore a tradition dress from the Cook Islands which are actually 3,000 miles away. Everyone’s in a total tizzy now. The Telegraph reports: “A spokesman for Clarence House said: ‘We saw they weren’t the same design of the traditional clothes we were told would be gifted, so we checked with the Solomon Islands government to ensure the right ones were worn. We were reassured the clothes were correct, and so the Duke and Duchess wore them to the event. It was not learned until later in the evening that the clothes weren’t from the islands. But it was understood that the Duke and Duchess intended to wear traditional Solomon Island clothes and this was appreciated. No offence was caused.'”

There are many reasons why I would make a sh-t princess but I would have been extra bad in a situation like this. The fact that Kate has to deal with this nonsense is ridiculous. Who the effity ef cares?? Well, the Solomon Islands do I guess. I don’t mean to oversimplify the situation – national pride is at stake – but come the ef on!

Speaking of the dress in question I absolutely loved it. It was by far my favorite of the trip but Kate’s also getting backlash for how much her wardrobe cost. According to Life & Style the eighteen outfits Kate brought for her nine-day trip amounted to about $25,000. Too much? I’m not sure. She is a princess and we all want her to look like one. And it’s not like she doesn’t try to recycle her clothes. I know people b-tch and moan about the economy but no one wants a busted looking princess representing them. If we never saw the dresses again then I’d say people could complain about the cost but if I know my thrifty Katie, I’ll bet we’ll be seeing them a few more times at least.

Do you understand why Kate Middleton’s wardrobe malfunction offended the Solomon Islands or do you think people have just way too much time on their hands to worry about things like that? Also, what do you think about the wardrobe costs? Should the royal family be more cost-conscious?