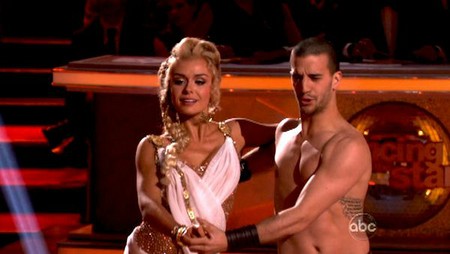 ROUND – 2 Katherine Jenkins danced the Cha Cha tonight for her trio dance as Dancing With The Stars continued with its eighth episode.  The competition is really heating up as the remaining six couples hit the ballroom tonight with two rounds of competitive dance performances, a ballroom dance and the Trio dance — both of which will be a style that they’ve not yet performed.

We recapped the tonight’s show for you and if you want to see how all the couples did go HERE!  Did you see Katherine’s performance last week if you missed it you can see it here!

Katherine Jenkins and professional dancer Mark Ballas, dancing the Viennese Waltz – Mark had this to say about the two dances tonight.  “Two dances and a double elimination.  There’s a Latin round and a ballroom round. There’s an extra little twist on the Latin round. So it should be interesting. It’s never been done before, so it’s very interesting.”

Judges Comments: Len: Well done Catherine! you had that little wardrobe thing that you kicked it off and got it done. Well done!  Bruno: that was sexy and cool. That was absolutely wonderful, I loved it.  Carrie Ann:  On the first dance you lacked a  little fire. Bring on the fire. You brought it with this dance. You had the pants stuck on your foot,  you never missed a beat. Well done!

Watch the video below and let us know what you think? Do you think that Katherine did enough to keep him around for another week? Sound out in the comments below!