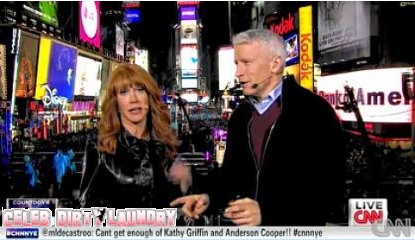 Kathy Griffin has never been one to — how shall we say? — utilize a filter for her actions and words and, during last night’s New Year’s Eve celebration alongside CNN’s Anderson Cooper, the comedienne let it all hang out. Literally.

At the start of the show, Griffin appeared feisty as ever, asking Anderson if “he’d just cracked one” or if he was “ready to see his balls drop. Anderson,” she whined, “when are we gonna see your balls drop?”

As the night progressed (and the television continued to be switched between Dick Clark/Ryan Seacrest’s Rockin’ Eve), hell continued to break loose and so did Kathy’s dress. As the cameras cut to a shot of the giant, glittering ball hanging in Times Square, Kathy quickly stripped down to her bra and underwear, despite her constantly being warned with “No Nudity” and “No Profanity” signs throughout the show.

Seeing Ms. Griffin in the flesh, of course, made The Coops a tad uncomfortable. And served as a catalyst for that borderline annoying little boy laugh of his.

“Are you freaking kidding me?” he said, waving the “No Nudity” sign in front of her. Despite efforts made by the CNN production crew to cover her up, Griffin proceeded to greet/charm NYC citygoers with her assets, as well as flirt with former presidential adviser David Gergen.

At Cooper’s remark, Griffin said,”You’re a big square who won’t let me have any fun. Your turn!” She proceeded to taunt him and desperately tryed to get him to remove his suit.

Cooper, of course, didn’t take well to the request and decided it would be best to leave his clothes on for the remaining broadcast. Kathy eventually covered up and all was well.

But we have a feeling she might have angered a few of the producers. And do you think Kathy cares? Absolutely not.

“I have a no-apology policy,” Griffin told CBS news. “No apologies for jokes. I apologize in my real life all the time. I say ridiculous things, I make mistakes constantly. But when I’m on stage, I’m at a microphone … it’s a joke!”

What do you think? Do you think Kathy went too far and unbuckled one too many buckles? Watch the video below and let us know what you think about the fiery red-headed comedienne’s New Year’s Eve antics!