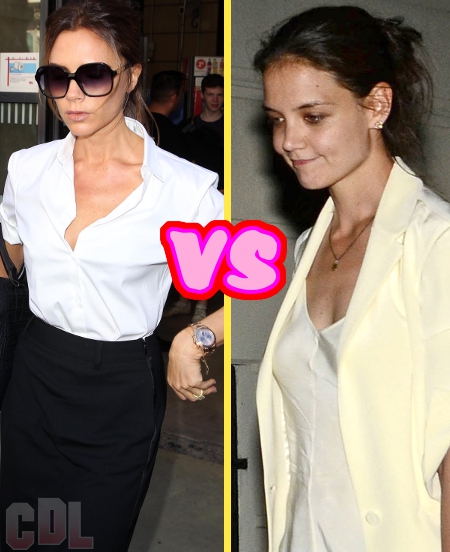 In the left hand corner, all the way from the UK, we have former Spice Girl Victoria Beckham. In the right hand corner, all the way from the USA, we have actress and current famewhore, Katie Holmes! These are both women who had amazing careers, but were sold short by the men in their lives. Katie and Tom Cruise went to hell and Victoria and David Beckham have had their fair share of toils and troubles (remember Rebecca Loos?) Now the former best friendship of Victoria and Katie will be tested, once again, during the catwalk next month at New York fashion week.

These two women are both hosting a show on September 9th and the bitch claws are coming out. According to the Daily Mail, Katie will be showing her Holmes and Yang collection for the first time, while Victoria will be presenting her VB show at the New York Public Library. Why is this important to us? Well, as both of these shows are happening on the same day, both of these women will be trying to overshadow one another’s publicity for these events.

An insider says, “Katie is definitely hoping to upstage Victoria. This is her first show and she’s determined to prove that she can pull it off.”

Katie, has anyone ever told you not to go up against a Spice Girl? They did sappy ballads back in the 90’s and they were one of the biggest girl groups in human history — well, that is if you don’t count the Kardashians and their reign of terror. A Spice Girl and Katie Holmes rivalry would be one for the record books, so we’re hoping that Victoria kicks Katie in the face with a shoe made from the tears of unicorns!

Let us know in the comments below which you’re rooting for. Is it Katie Holmes with the tears of a clown? Or is it Victoria Beckham, the stick figure? We’re rooting for Beckham because, even if she wins, she won’t be able to speak from all of the Botox injections, and that would be funny to witness.