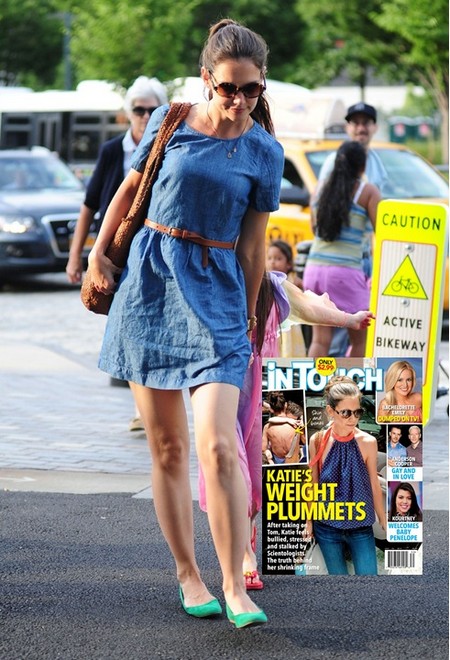 Stress has a way of doing a real number on your body and in the past two weeks Katie Holmes has really gone through the ringer. After filing for divorce from Tom Cruise, the actress has been bullied and followed by Scientologists.

She has come under fire in the past over her weight and the star stepped out this past week looking extremely frail again. The new issue of In Touch Magazine has an in-depth look at the latest on this story, as Katie was seen out shopping with her daughter in NYC.

“Her cart was filled with fruits and vegetables, but as Katie Holmes shopped with her 6-year-old daughter, Suri, at a Whole Foods in NYC on July 8, the actress looked in desperate need of heartier fare. “She’s lost a lot of weight,” says an observer, adding that fellow patrons couldn’t help but notice Katie’s rail-thin arms, prominent collarbones and gaunt, exhausted-looking face. “She obviously has been under a lot of strain.”

Anderson Cooper recently confirmed what we already knew, he’s gay. The latest issue of In Touch will take you inside his private life and introduce you to the man that has won his heart.

Also in the new issue you can learn the latest details on Kourtney Kardashian and Scott Disick’s new arrival, Penelope Scotland. If you’re a Bachelorette fan you’ll want to read up on how Emily Maynard gets dumped on national TV! Does she really make it to a final rose ceremony and a proposal? Check out all of these stories and more in the latest issue on newsstands now!