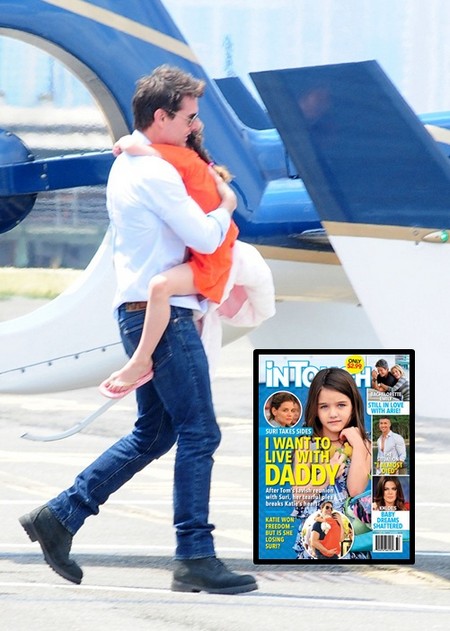 Katie Holmes seems to have pulled off the unimaginable – a clean break from Tom Cruise, the master control freak husband, while holding on to primary custody of daughter Suri. Wow! Compare that to Nicole Kidman who was lucky to escape her marriage to the Scientology freak with her skin – she effectively lost her children and had a miscarriage over the horrible stress. But now Katie is realizing that while she may have won the first battle, the war is far from over.

The problem is that Suri loves her daddy and misses him hugely. In fact Suri is making it clear to Katie that she ‘wants to live with daddy!’ Yikes! Suri appears to be a most demanding and spoiled child – she always gets her way or turns immediately into a sulking and crying little devil. Now Suri is militating to live with Tom and Katie is in a panic.

This week’s issue of In Touch has the cover story ‘I Want To Live With Daddy’ and explains that ‘After a whirlwind visit with her beloved father, Suri misses Tom Cruise more than ever — and Katie Holmes copes with the fallout.’ According to the mag Suri is taking sides and she is not taking Katie’s!

In Touch also promises to explain Khloe Kardashian’s heartbreak as her ‘Baby Dream Shattered’ once more. We suggest that Khloe just adopt already and give up trying to get pregnant. It seems the poor woman and her husband, Lamar Odom, have tried everything twice with no results.

The cover also lets us know that Mike ‘The Situation’ Sorrentino claims he almost died. From what? Stupidity? I didn’t know lack of intelligence could be terminal. Perhaps he is referring to his drug and alcohol abuse – or maybe his addiction to the anabolic steroids he uses to build his scrawny self into a semblance of manliness. In any case you can buy the mag and read the whole story.