Katy Perry Kisses A Boy And She Likes It (Photo) 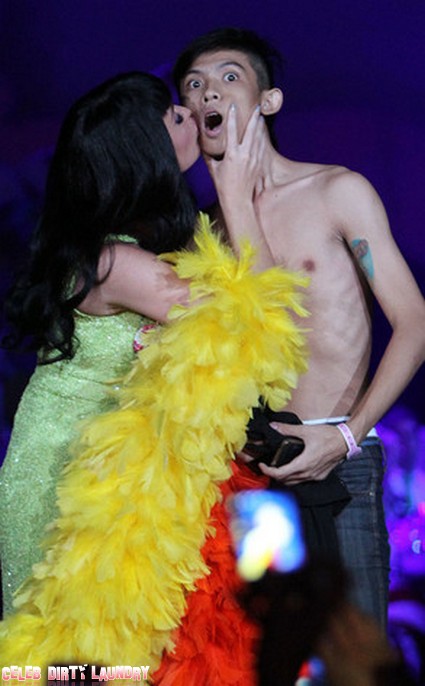 Katy Perry isn’t sitting at home wondering what went wrong in her shortlived marriage to Russell Brand. She’s back where she belongs – on stage, wowing crowds and being her flirty, fun self. Girl power!

The singer has made a triumphant return to performing in Jakarta on her Teenage Dream tour. It was Katy’s first concert since the British comic filed for divorce at the end of last year. But if she’s still coming to terms with the split she wasn’t showing it on stage. The show was a knockout and the crowd couldn’t get enough of our favorite California Gurl. Katy even looked like the quirky, pop singer of old as she covered up her recently dyed blue hair with a black wig.

The highlight of the night for Katy may have been a close encounter with a fan. It might be the first boy she’s kissed since her brief marriage ended. By the look on her face – and his  – I think she liked it!

Katy is almost at the end of this seemingly never ending tour. It wraps up next week in Manila in the Philippines. But there’s plenty on her to do list. She’s prepping songs for her next album. There’s a lot of pressure and high expectations after the massive success of  Teenage Dream. She could also add some gramophones to her cabinet full of silverware. She’s nominated for two Grammys at the February 12 awards in Los Angeles  –  Record of the Year and Best Female Pop Solo Performance for Firework. All this could leave you asking Russell who?