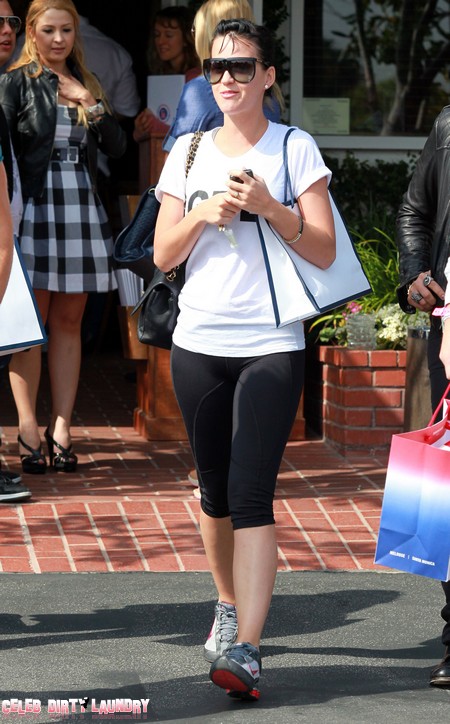 Katy Perry is going to have her revenge on Russell Brand by outing him and all his kinky sex fetishes in a tell-all book.  Publishers are competing with each other and have driven up the price so that Katy has been offered $3.1 million to write the tell-all book.

Katy was tossed to the curb by Russell Brand when he filed for divorce in a surpise move last December.  Since then the jilted singer has acted like the walking wounded, making embarrassing moves on other celebs and NFL players who clearly have no interest in her damaged goods.   Katy finally seems to have found a willing victim ‘to fall in love with’ in 22-year-old Chanel model Baptiste Giabiconi.  No doubt Baptiste is merely using Katy for her international superstardom to boost his career – but she is too desperate to notice.

BANG reports: Katy Perry has reportedly been offered $3.1million to write a tell-all book about Russell Brand. The former couple split in December after just 14-months of marriage, with Russell, 36, filing for divorce citing “irreconcilable differences”.
Both have maintained a dignified silence since their separation, but three publishers are now said to be competing to get 27-year-old Katy’s side of the story.

A source said: “When everything was going well, Katy couldn’t stop talking about him.  Since the split neither of them have said anything – keeping the price of a deal high.”

Meanwhile, Katy is rumoured to have moved on with 22-year-old Chanel model Baptiste Giabiconi- who she was spotted “flirting” with at Paris Fashion Week.  One person said to be thrilled about the love match is the fashion house’s creative designer Karl Lagerfeld, who is believed to have played cupid between the two.

A second insider told The Sun newspaper:  “Karl has a father and son relationship with Baptiste – he discovered him in 2008.  He told Katy that Baptiste would be perfect for her and he was right as the pair hit it off straight away.”

If Katy has hope of preserving any of her rapidly diminishing integrity she better decline the offer to write the book.  What do you think?  Let us know in the comments below.