Katy Perry’s Side Of The Story, Russell Brand Was Crazy (Photo) 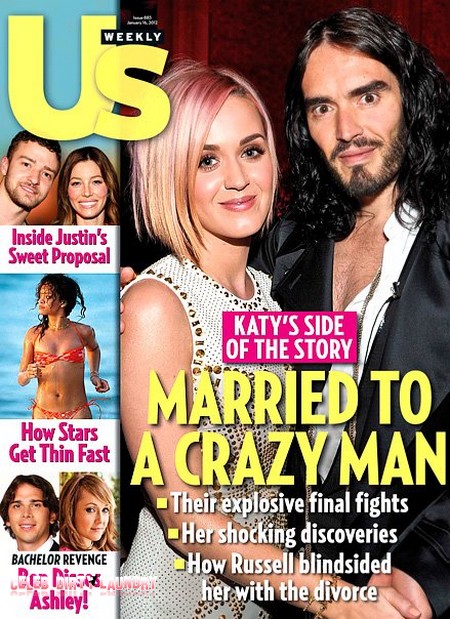 The current issue of Us Weekly features the cover story, ‘Katy’s side of the story, married to a crazy man.’  When the couple spent Christmas 7,000 miles apart with Katy in Hawaii, while her husband was in Cornwall, South West England it fueled the speculation that a divorce was imminent.  “They had a massive fight.  She was like, ‘F–k you. I’m going to do my own thing.’ Russell replied, ‘Fine, f–k you too” an insider revealed.  Russell Brand filed for divorce from his wife of 14 months Katy Perry on December 30th, 2011.

At the time it was believe that Katy‘s party hardy lifestyle, and her refusal to settle down and have a family, are what forced Russell to file for divorce.  However, US Magazine has Katy’s side of the story and they claim the problem was Katy was married to a crazy man.   They had explosive fights and she made shocking discoveries, do tell.  Wonder what those discoveries are and if they are going to be leaked.

The magazine goes on to claim that Russell blindsided her with the divorce and they have all the shocking details. What do you think did Russell blindside Katy?  Sound out in the comments below!  Also included in this week’s issue the magazine claims that Jessica Biel and Justin Timberlake are engaged. “Jusin popped the question to Jessica, 29, in the mountains of Jackson, Wyoming. “Justin knows how much she loves snowboarding and the mountains, so it was the perfect place,“ one insider explains.

To find out Katy’s side of the divorce story and more, pick up the current issue of US Weekly.