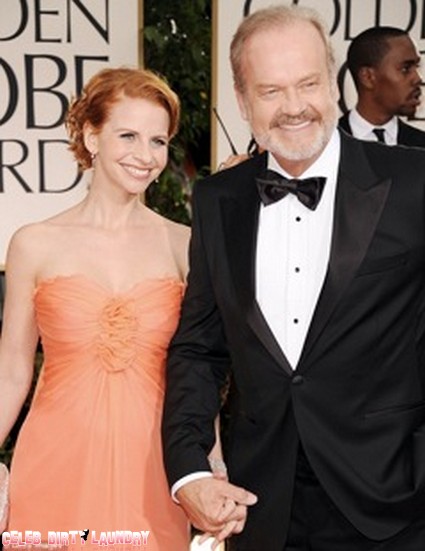 The Golden Globes is prime time to be on baby bump watch. And if you were looking very close during the red carpet tonight you would have spotted a wee tummy on Kelsey Grammer’s latest wife—and former mistress—Katye Walsh.

Apparently in the second trimester of her pregnancy, 32-year-old Walsh looked radiant in a peach gown, and walked hand in hand with Grammer who is nominated for Best Performance by and Actor for the TV Drama Boss. A rep for Walsh and Grammer confirmed to People magazine earlier today that the couple is expecting.

This will be a fifth child for the 56-year-old Fraser star, who has two children with ex-wife and Real Housewives of Beverly Hills star Camille Grammer, a teenage daughter with former girlfriend Barrie Buckner, and an adult daughter with first wife Doreen Alderman.

The couple recently admitted that they suffered a miscarriage in October of 2010 before they were married. They tied the knot on February 25th 2011 at the Plaza Hotel in New York City just 15 days after Grammer’s divorce to Camille was official.

Let’s hope this is a fresh start for the couple, whose marriage began in scandal with an affair. Grammer admitted on Jimmy Kimmel Live to falling in love with Walsh while he was still married to Camille. He told Kimmel that he met Walsh, who was a British flight attendant, on a December 2009 flight to England and they spent a night together in London. ‘We went out for coffee several days later and had this magical night in the snow in London around Christmas time,” he said. Grammer then continued to see Walsh in secret for six months before allegedly breaking up with then-wife Camille in a text message that said, “I don’t want to be married anymore”. Yikes!

This will be Walsh’s first child—that is if you don’t count the man-child she married.