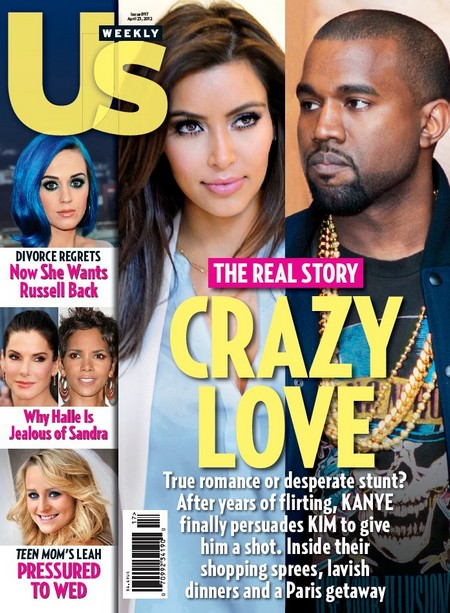 Khloe Kardashian has confessed to the truth as to whether the sudden whirlwind romance between Kim Kardashian and Kanye West is crazy love and true romance or a publicity stunt!  While Kim and Kanye have known each other for years it seems that all of a sudden what was a friendship for years has blossomed into a heavy romance.

Naturally, any move by Kim comes under intense scrutiny since her wedding and divorce with Kris Humphries appears in retrospect to have been planned exclusively for reality TV.  It does seem rather a coincidence that right before the cameras start rolling for next season’s reality show filming Kim decides to have a very public love affair with one of the biggest names in popular music…

This week’s cover story on Us Weekly promises to reveal what Khloe Kardashian had to say about her big sister’s current love affair – is real or is it fake?

The cover also promises to blow the lid off of the simmering jealous feud between Halle Berry and Sandra Bullock.  It seems Halle is jealous of Sandra…

We also are promised an expose on the startling revelation that Katy Perry is desperately unhappy and wants Russell Brand back!  I wouldn’t hold my breath Katy – Russell might be a recovered drug addict but he doesn’t need any part of your mess.

Teen Mom’s Leah Messer is being pressured to wed!  At least is the claim on the cover of Us Weekly.  Can’t wait to learn who is pressuring her and why.

Us Weekly gives us a hint:  Kim Kardashian and Kanye West stepped out yet again in Manhattan on Tuesday night. The reality starlet, 31, was the rapper’s surprise date for Chanel’s star-packed Tribeca Film Festival Artist Dinner, held at Odeon in downtown Manhattan.

Although Kardashian and the “Otis” rapper, 34, skipped interviews and the red carpet, their body language, not to mention their style choices, did all the talking.

Holding hands as they entered the bash, the duo wore complementary outfits — she in a black and white dress, he in similarly monochrome t-shirt, pants and blazer. Inside the party, also attended by Robert De Niro, Liv Tyler, Camilla Belle, Kellan Lutz and Leelee Sobieski, the pair were all smiles as they chatted up supermodel Karlie Kloss.

After first debuting their romance in the Big Apple on April 5, the high-profile couple reunited in NYC last Saturday with a luxe shopping trip at Balenciaga; two days later, they were openly affectionate at the Monday night opening of Scott Disick’s new Japanese eatery, RYU.

“It’s a really good friendship that went into dating,” sister Khloe Kardashian told Us at the bash.

What do you think the truth is?  Can Kim possibly do anything without her reality TV empire in mind?  Does Kim really love Kanye or is this just good business?  I’ll be buying my copy of Us Weekly to learn the truth.