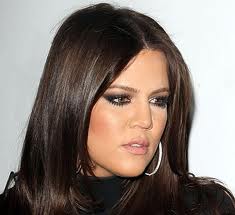 Khloe Kardashian says ‘no’ but her father-in-law, Joe Odom, says ‘yes.’  And what are the two disagreeing about – Khloe’s pregnancy of course!  Joe told RumorFix Tuesday that he is ‘about ready to have a grandchild.’  That is great news and must cheer up Lamar Odom in light of his being dumped by the Dallas Mavericks.  Khloe herself has been crying to get pregnant so what more could she want – okay maybe a real job for her husband…

But Us Weekly claims that sources close to Khloe say she in NOT pregnant.  However, such un-named sources are notoriously unreliable and so we are hoping that the news of Khloe’s pregnancy is for real.

Lamar Odom‘s father, Joe, may have told RumorFix.com his son and daughter-in-law Khloe Kardashian were expecting their first child, but a source close to the 27-year-old reality star tells Us Weekly she’s not pregnant.

“I got a little news,” Joe Odom told RumorFix Tuesday. “I’m about ready to have a grandchild!”

Kardashian — who wed NBA star Odom, 32, in 2009 after one month of dating — has long been vocal about her desire to have a child and the struggles she’s faced when trying to conceive.

“It’s so hard. I never knew about ovulation and the limited amount of time that you have to get pregnant,” Kardashian has said. “We would love to have kids.”[But] when you have schedules such as ours, it’s really hard to hit that mark. So it’s frustrating, but definitely. I want to have kids.”

Who to believe? Do you think Khloe is pregnant?  Would Lamar’s dad leak the news for no reason?  Could papa Odom be mistaken?   Would Khloe lie?  Let us know in the comments below.