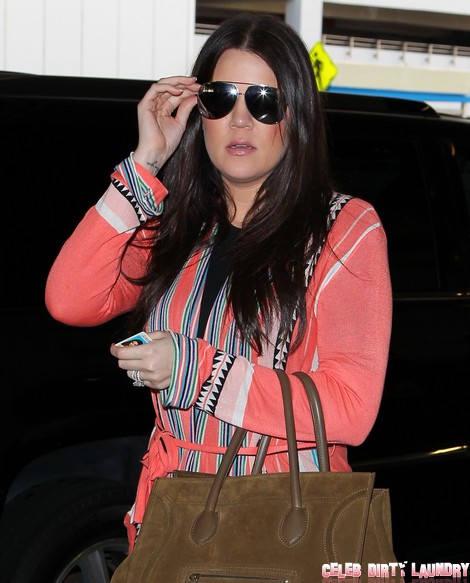 Lamar Odom, the emasculated man-candy of Khloe Kardashian, wants to express his musical talent in a rap song. According to new reports, Lamar is obsessed with becoming an internationally famous rap star, following in the footsteps of Kim Kardashian’s rap star BF Kanye West. (Un)fortunately, Khloe is not as excited about her husband’s rap ambitions.

Khloe recently revealed to the famous US talk show host Jay Leno, “He [Kanye] and Lamar get along really well, it’s really funny because Lamar thinks he’s really good, no he is really good, he can actually rap. He’s really good at the writing, he doesn’t think it, but he is good at it, he really is. I don’t like to encourage it too much as he gets really over excited about it. He’s sent Kanye his lyrics and Kanye likes them. They kind of egg each other on… bounce things off each other. I’m like, ‘Kim I’m so sorry! He’s done it again!’ He’s gone Kanye crazy a bit.“

She also revealed, in true everything-on-the-table Kardashian fashion, that she doesn’t really pay any attention to her husband’s rap songs, as they can sometimes be pages long. The reality television star said, “Can I remember any lyrics he wrote? Absolutely not! No, I cannot. They go on for days… We were in Australia once and Lamar was there rapping, and Kim was like, ‘Seriously how do you do this? He raps so much!’ I was like, ‘Hello! Kim, look who you are dating right now, you are dating a rapper. This is what you get!‘”

Right. And you’re wondering why people call you vile villains? Hating on someone else’s dream is like stealing candy from a mute kid at the mall.

The reality star and part-time X-Factor host also dissed her mother during the interview. When Leno asked if Kris Jenner, professionally known as Momager and Horrorface, can also sing, Khloe referred to Kris’ greedy ideology by saying, “Oh, come on! My mom would do anything for that ten percent wouldn’t she!”

The X-Factor host – more like the host of a flesh eating bacteria – is not just destroying her familial relationships on live interviews; she’s also currently destroying the future of the make-up industry. Whilst promoting the Kardashian’s Khroma Beauty line – they tested it on ogres, so it should work – Khloe revealed that her top beauty tip is to “darken her scalp with an eye shadow colour.” So, she’s basically drawing pictures on her head? Doesn’t she have anything better to do? Like, say, practice hosting live television?

“If I bronze my face, I always take an eye shadow colour [that matches my hair] and darken my scalp so it doesn’t show how pale you really are. [Khroma] has the blessing of having three different designers as sisters, who like three different things and who also have three different skin complexions,” Khloe explained to People magazine.

Yeah, about that make-up line… You don’t perhaps have invisibility bleach? Because we’re totally tempted to try it out on your family. Bruce Jenner also needs a facial scrub down, as Botox only lasts as long as your previous facial leak – and that man is leaking like a burst water pipe in Kansas!

Watch this space; one of these days the Kardashians will be transported back to the planet where they came from. Only a matter of time, folks!