Khloe Kardashian Is Fighting To Save Her Marriage 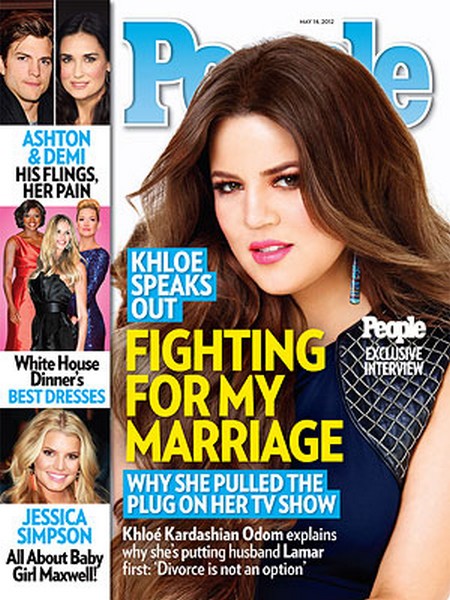 The current issue of People Magazine features the cover story ‘Khloe Speaks Out – Fighting For My Marriage.’  People has an exclusive interview with Khloe Kardashian – she has dished on why she pulled the plug on her reality show ‘Khloe and Lamar.’   Khloe told the magazine she is putting her husband Lamar Odom first and she is fighting for their marriage.  Divorce is not an option for the couple.

People has the scoop: “We just wanted to prioritize a little,” Kardashian, 27, tells PEOPLE in an exclusive interview as the couple tables their show Khloé & Lamar until his basketball career is back on track. “We just wanted a little pause. Part of being married is knowing when your husband needs your support.”

Khloe is making sure her life with Lamar is no longer on display.  The risk of losing Lamar and damaging their relationship was too great.  “I’m a modern girl, but you should put your husband first,” she says. “I like to think divorce is not an option.”

Lamar Odom resigned from the Dallas Mavericks just as the team was about to cut him from their roster.   Now that they are not appearing on a reality show the pressure is off and Khloe hopes that Lamar can get his basketball career back on track.

For more on the exclusive interview and Khloe and Lamar’s plans to start a family, pick up the current issue of People Magazine on stands Friday!