Khloe Kardashian Reveals How She Got Thin So Fast (Photo) 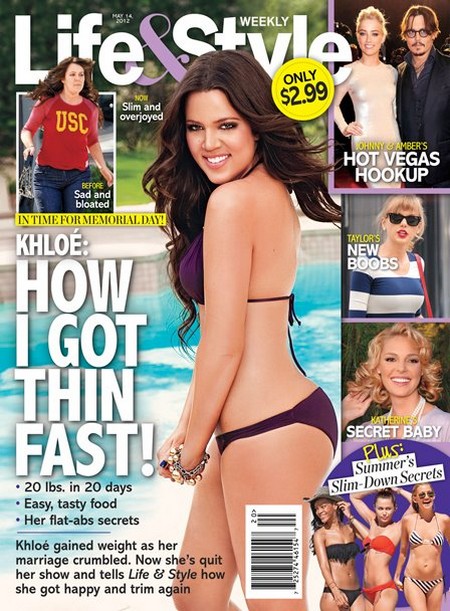 The current issue of Life & Style Weekly features the cover story ‘Khloe: How I Got Thin So Fast.’  On the cover they have a photo of Khloe Karadashian when she was sad and bloated and now she is slim and overjoyed.  The magazine has all the details of how Khloe lost a whopping 20 lbs in just 20 days and they have all the details for us so we can be slim by Memorial Day.

The magazine claims that Khloe put on the weight as her marriage started to crumble.  Her husband Lamar Odom blamed Khloe for the humiliation of being fired by the Dallas Mavericks.  A source revealed, ‘his play has been downright atrocious this season — he’s put up career low numbers and just hasn’t appeared motivated on the court.’  To save her marriage Khloe pulled the plug on their reality show Khloe and Lamar,  she is determined to make her marriage work and get back in shape.

Also included in this issue they have all the info on Johnny Depp‘s and his Rum Diaries co-star Amber Heard‘s hot Las Vegas hookup.  Amber was recently caught boarding Johnny’s private plane even thought the promotional tour for their movie neded months ago.  Maybe those breakup rumors are true!  What do you think is Johnny hooking up with Amber?