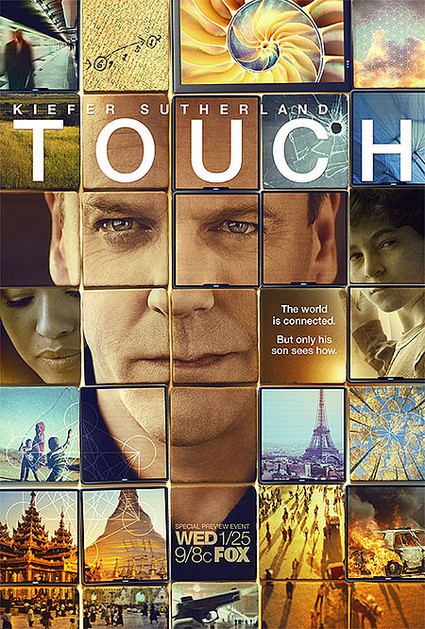 My favorite actor from 24, Kiefer Sutherland is back with a new show called Touch.  The show does not premiere until March 19th, 2012 but tonight there is a special preview of the pilot episode.

Touch is a new Fox drama  in which Kiefer plays the father of a 10-year-old boy who has never spoken and doesn’t communicate in any traditional way.

The show airs at 9PM tonight on Fox and we will be live blogging it will all the up-to-the-minutes.  So come back to this spot and spend the evening with us enjoying Kiefer!

While you wait for the recap you can check out two preview videos for the show here!

RECAP: The show begins with Martin at work, it’s in an airport and he is given a box of lost and found – there is a phone in it and it rings, the guy on the line tells him that he needs the phone and a photograph that’s inside it, he needs it back desperately and he is in Mumbai. Meanwhile Martin’s own phone rang, he gets a call from the school – he has to go pick up his son – while he is on the phone, the one he found is gone down the luggage conveyor belt.

Martin arrives at an electric tower that his son climbed up, he talks him in to coming down and one of the people on site tell Martin that he is going to have to report this to child services this time.

Martin arrives at an electric tower that his son climbed up, he talks him in to coming down and one of the people on site tell Martin that he is going to have to report this to child services this time.

Martin goes into a store with Jake and all of a sudden Jake grabs a lotto ticket belonging to some guy and runs to the car, locks himself in. His father tries to get him to open the car, the guy who owns the lotto ticket calls Jake some name and when Martin gets upset about it, the guy hits him. After Jake writes down the numbers from the lotto ticket, he opens the door and gives it to his dad.

In a bar, a guy named Miles is taking pictures of a girl with a cell phone, it is the actual phone that Martin found earlier in the day in the lost and found and tells her that there are all these crazy videos on it. Miles sees a guy getting into a cab and slips the phone in his bag.

It’s late at night, Jake is in bed and Martin tells him that the doctor said that he is going to be bigger than him. Martin hears a cell phone ring, he walks out of the room and finds lots of cell phones on the floor and they are ringing from the same number, it was the same number that was on the loto ticket.

in Baghdad a young boy is watching Chris Rock on tv when his mother comes in and tells him the stove is broken and they won’t be able to make bread to sell.

Social worker, Clea Hopkins stops by to see Martin about Jake. She tells him that is not a stable life for him, his son has moved to many schools, he has had many jobs and it’s not good for Jake. Clea wants to meet Jake, he is right behind her and she goes to touch him but Martin advises her not to, nobody can touch him. Meanwhile, Martin is reading the paper and he finds the numbers from last night right on the front page, it’s the winning numbers for the lotto.

We see a guy pick up his phone (same guy Martin spoke to at the airport) and tells this woman on the other end that he wants to come home. Then there is another guy on a plane, on his way to Tokyo, he calls his wife and asks her if they took any pictures of Lilly on their mobil phone and she says no. He tells her that he is going to try and get home for his daughter’s birthday, meanwhile she is crying and tells him not to bother.

Clea tells Martin that being fascinated with numbers is nothing new with children like Jake. Martin tells her about the number “318”, he thinks Jake is trying to communicate something because he keeps relating to that number. Clea advises that there will be a two week evaluation, away from the house, to decide if Jake has to be institutionalized.

We are back in Baghdad, the boy is trying to figure out how to come up with the money to fix the stove. A friend of his tells him that he can help him steal one from this restaurant that terrorists hang out at.

Now we are in Tokyo, a girl is sitting on a bed in a hotel room and starts hitting on a guy who just came into the room. While he is in the shower, she steals from him and heads out the room.

Martin drops Jake off at the center, where he will stay for two weeks for his evaluation – there is a heartfelt goodbye, Martin tells Jake that he loves him and Jake walks away with Clea.

Martin visits his wife’s grave, she dies in the twin towers on 911. He tells her that God never gives you more than you can handle, but maybe he has this time because he just can’t reach his son and he feels like he failed them both. All of a sudden, he sees a fireman’s badge  beside the grave stone and it’s got the number 318 on it.

Back in Tokyo, the girl who was in the hotel room has THE cell phone.

Martin is back at work, he is on his computer and it leads him to the Teller Institute. The guy who answers the door, professor Arthur Teller, says “let me guess your kid keeps climbing a tower”. Martin turns around and goes into the house. Teller starts telling Martin about how every moment, every thought is connected – his son sees everything, the past, the present and the future. His son is a road map and it is Martin’s destiny to follow it.

Jake is with Clea and he writes her mother’s phone number in popcorn. Clea claims she hasn’t seen that number in years, all of sudden her cell rings and it is that same number on it. When Clea picks up the phone, she says “mom”, “mom”, but nobody is there.

We are back with the guy who wanted to go home, he is booking his flight to New York city.

Martin is at his desk, trying to figure this all out – he comes up with a phone number,does a reverse phone lookup and comes with the address of Grand Central Station. Clea is at the door, 318, is today’s date – they both head to Grand Central Station. Martin keeps calling the number, until he hears it ringing. Martin runs to a payphone and needs to answer it, a guy is on it and Martin tries to get him off. He turns the guy around and it is the same guy the day with the lotto ticket. Martin hauls and punches and tells him that is for the hit he gave him that day. Security arrives and wrestled the two to the floor.

Back in Baghdad again, the boys are trying to steal the stove when the terrorists come in a throw a bag full of weapons on the table and THE cell phone. The terrorists leave, or so the boys think, one stays behind and catches the two boys. The terrorists threaten them and the one boy that was there to get a stove tells them the truth, the terrorist asks him what he is willing to do for it.

Martin is back home, he listens to his messages, it is a fireman from ladder 318, he tells her that he was the one to find his wife. He played the same lotto ticket for ten years and he won money because of her and wants to share the money with him. The TV is on, 25 children were in a bus accident, #318 is on back of the bus, the guy from the day with the lotto ticket saved the children because he missed his train because Martin had the scuffle with him.

Martin heads over to see Jake, he is gone, he is escaped the facility.

The guy who was heading to Tokyo calls his phone company and asks them to try and find his phone, he begs them to help him retrieve it. He tells the girl that there are pictures on the phone of his daughter, she died last March on the 18th day. All of sudden he turns around and sees all his photos on a big screen above a store.

In Baghdad, the boy who tried to steal a stove hears a phone ring – he answers it and it is the girl from the phone company, he tells her that the phone is connected to a bomb. She tells him to take the battery out of the phone, he has a choice. She goes on to try and convince him to take out the battery and he tells her that he needs an oven, she promises him an oven and tells him that she is disconnecting the phone, he unplugs the battery just in time before the bomb goes off.

Martin and Clea head to the tower in the rain and find Jake on top of it. Martin is terrified of heights but he makes it to the top of the tower with Clea and tells him that he can hear him now, he tells him about the kids that were saved on the bus because of him. Jake gets up, runs towards his dad and hugs him, but at the same time he dials a number. Martin dials the number and a guy named Artie answers, Marting tells him that even though this is going to sound strange, I think we are supposed to know each other.