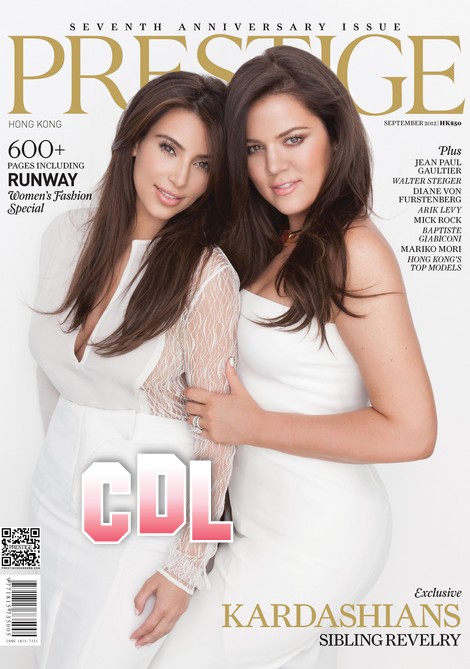 In another lovely artificial cover featuring the Kardashians, Kim and Khloe Kardashian pose their own eyes out. The two Photoshopped reality television stars pose in all white, on a white background. Did someone say virginal white? Oxymoron if you ask us.

There have been abundant rumours about Khloe’s womb and whether a tiny Kardashian has been brewing there for a while. These images, even though they have been doctored, unfortunately do not dispel these rumours. Khloe is turned to her side, with her one hand lovingly holding her sister’s arm. Khloe and Kim’s faces do not seem fully formed in their classical smirk, which makes us want to raid a Botox factory and pump a vial of Bruce Jenner juice in our own puffy faces.

Why is Khloe turned so eloquently to her side? Is the Kardashian sister trying to hide a miniscule baby bump, or is she posing to the side on purpose? The Kardashians know their brand and market extremely well, so we wouldn’t put a purposeful “look-at-my-baaaaybee” side-pose beyond them. We have to admit, both of the Kardashians look extremely distinguished and slightly forlorn in these photos, as if they see Bruce Jenner in the distance of the camera lens, running towards them with billowing hair and Botox drool. Their faces are softened by photo editing software which gives them an angelic and lingering sparkle in their eyes. It definitely works on these two villains.

What would a Khloe pregnancy mean to the entertainment industry? Kourtney Kardashian’s babies aren’t that special, because she buys babies from the shelves of Wal-Mart every other month, but a Khloe baby? Now that would be something to behold.

Let us know in the comments below if you think the Kardashians look radiant in their latest cover and whether you think Khloe is preggers.