Kim Karadshian’s Divorce Hell – Her Side Of The Story 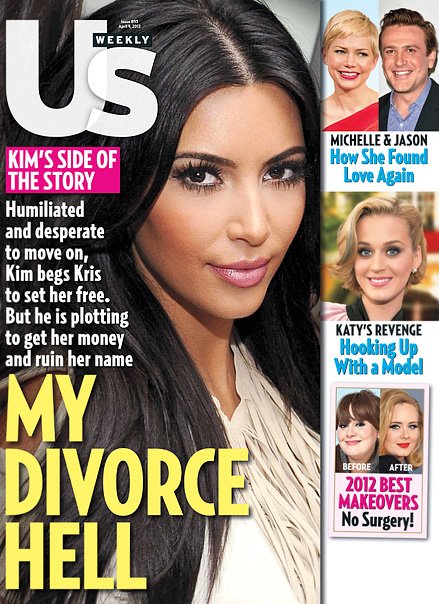 The April 9th, 2012 issue of US Weekly features the cover story ‘Kim’s side of the story – My Divorce Hell.’  The magazine has Kim Karadshian’s side of the divorce story and wants to share all the details with us.   Kim has admitted that dumping Kris Humphries after only 72 days of marriage has made her look like a monster and this has ruined her life.  This is not the first time Kim has tried to justify her marriage/divorce to Kris and has said how even her sisters and Mom warned her about tying the knot – but she didn’t listen.

The magazine claims that poor Kimmie is humiliated and desperate to move on.   Kim has begged Kris to move on but Kris is plotting to get her money and ruin her name.  boo hoo – it is not exactly like she ever had a good reputation……. least we forget her sex tape etc etc….

What famewhore Kim actually fears is that if Kris gets his way and her divorce proceedings are televised and this will put the last nail in the coffin of her former popularity. Kim is blaming Kris for starting the mud-slinging that has grown into an all-out publicity war between the two.  Meanwhile Kris has implied that while he is a genuine person his estranged wife Kim is all about the money.

Do you think that Kris is less money-hungry than Kim. Or like me, do you think Kris is just the same type of famewhore as his soon-to-be ex-wife? Let us know what you think in the comments below.

Also included in this week’s magazine they have all the info on Michelle Williams and her romance with Jason Segel.  “They are smitten and very serious,” according to the magazine.  To find out all this and more pick up the current issue of US Weekly!