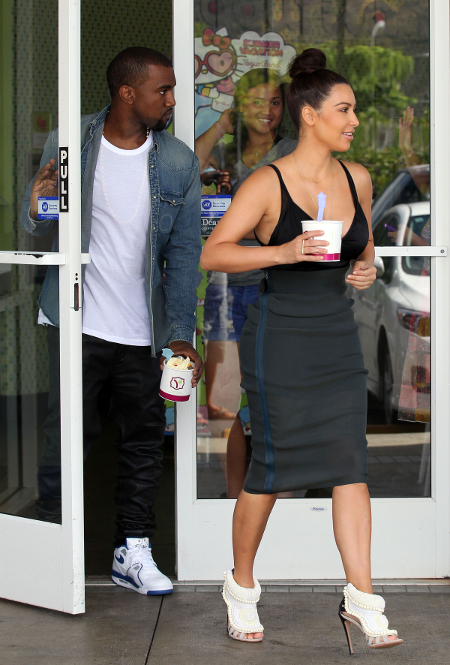 A Kim Kardashian breakdown could signal the imminent destruction of the world. It would be one of the most disturbing moments in history, up there with the asteroid that destroyed all those pretty dinosaurs. Kim has been posting photos of herself online, incessantly, over the past few weeks. Is this a case of being an ego maniacal loon? Or is there something sinister hiding beneath her junk in the trunk? She has overshadowed her sisters Khloe Kardashian and Kourtney Kardashian in media exposure and her OCD narcissism has reached new levels of insanity. Kim is teetering on the edge of glory, spitting in the pit of madness.

We’re not going to go all One Flew Over The Cuckoo’s Nest on you, but Kim has been under severe pressure since her quickie marriage ended with Kris Humphries last year. Humphries and Kim have been fighting over the integrity of their “marriage” ever since then, with Kim hitting back at Kris for trying to declare their nuptials a fraud. Kim has since been happily together with Kanye West, but could a new relationship save Kim from her emotional destruction? Could Kanye be her Valium cloak? Humphries is pursuing his civil divorce fraud case and Kim is planning to destroy him on her television show. The divorce case next year has been touted as the divorce of the century.

We have all witnessed the antics of the Kardashians, with Bruce Jenner and Kris Kardashian receiving most of the ridicule. He has been likened to a Botox baby, stuck in a strange dimension of Macarena dancing and George Michael music. Kris has been labeled the biggest fame whore this side of Katie Holmes, but has never backed down from the media onslaught that hits her family every day. They say in Psychiatryville that madness is genetic and it seems that Kim might have taken too much of the DNA liquid when she was chillin’ and doin’ her nails in Kris’ outdated womb.

All this media scrutiny, stress of public life, and the impending divorce from hell, might have sent Kim to a land far, far away. We’re expecting a blow-up of Britney Spears proportions, with Kim sitting on a sidewalk and screeching like a Wendigo who watched too many episodes of Keeping up with the Kardashians. Don’t worry, Kim, there’s nothing that a little bit of lithium and valium can’t fix.

Let us know in the comments how much you’re betting on the moment Kim loses it all.

Image credit to FameFlynet — pic of Kim and Kanye was taken yesterday when they were spotted out getting some frozen yogurt.