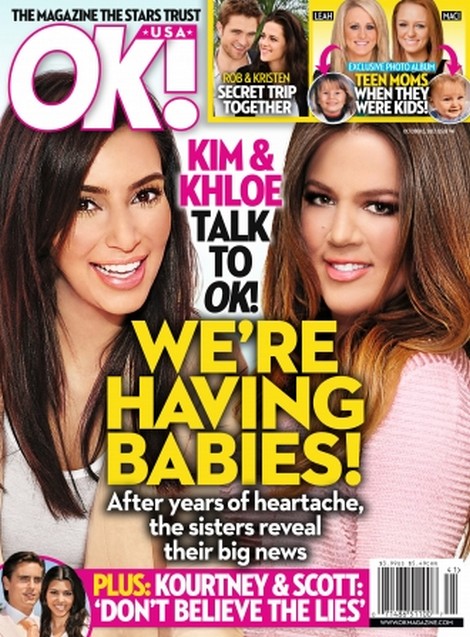 Is it finally their turn? I’m talking about Kim and Khloe Kardashian and if the latest issue of OK Magazine is to be believed then both of these ladies are ready to have babies!  I mean we all know that Khloe desperately wants to be a mom and I happen to think she’ll be an amazing one, but what about Kim?  She has been dating Kanye West for about 6 months now but Kim doesn’t exactly have the greatest taste in men and I’m not so sure that Kanye is really father material, are you?

More Kardashian info inside this issue as Kourtney and Scott Disick are telling us not to believe the lies about their relationship.  I generally form my own opinions so someone telling me that Scott is a trash bag doesn’t hold much water. Seeing him on camera smashed and partying with other women, then being fairly MIA while Kourtney was pregnant with baby Penelope does. Hopefully Kourtney will come to her senses and realize that she deserves and can find a better example for her kids.

Supposedly Rob Pattinson is working on mending his relationship with trashy Kristen Stewart and according to OK the two are spending time together away from all the raised eyebrows and friends warning Rob not to take her back. Do you think a getaway will fix the damage that she has done?

Doctor’s always warn you about having babies too close together, especially if they are delivered via c-section. Apparently Tori Spelling learned what can go wrong in the most unfortunate way as just a week after delivering she was back in the hospital with complications. Speaking of moms, grab this issue of OK to read about how a whole bunch of A-listers unwind after chasing babies and helping with homework!