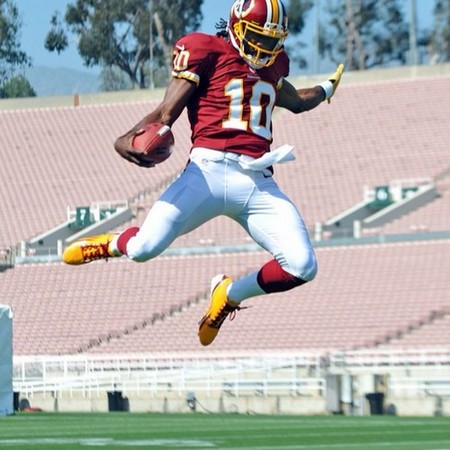 Kim Kardashian may look as if she is so in love with Kanye West, but rumor has it that just a few short weeks ago, Miss Innocent Kimmy was eyeing up NFL’s number 2 draft pick Robert Griffin III! I always knew Kim was a little scandalous, but when you’ve got a man worth millions and is self-proclaimed “best rapper” in the game, who is as much of a fur head as yourself and is keeping people talking, why ruin a good thing?

Well, eyes do wander and there is even a reliable source who is willing to say that Kim had her eyes on Mr. Griffin! Jack Burdett, executive producer of 30 Rock, recently said in The Rich Eisen Podcast radio interview that when Kim was visiting the 30 Rock set in April to film for the season finale of the show Griffin II was there to check out the taping after he got chosen to play for the Washington Redskins.

Media Take Out reports that Burdett said, “She sat next to me, while we were watching the show on the monitor and RG3 is a few seats down, and during the commercial break, she starts asking me questions about him. Like, ‘Now, he’s a football player, right?’ I’m like, yeah, yeah. (Kim says,) ‘And he just … something big happened, right?’ I’m like, well, yeah, he just was the No. 2 overall pick tonight. (She asks) ‘And what team?’ … Washington. (She asks) ‘What’s Washington?’ … Redskins. She goes, ‘I don’t know much about football, but, so what’s his deal?’ And I’m thinking, ‘You stay away from him. This is a nice young man.’ “

Burditt then added, “Her inner alarm was going off.”

If you all recall, Kim and Kanye (or KimYe as some people are calling them), were showing off their probably fauxmance to the world back in early April. How come this news wouldn’t exactly surprise me if it was true? 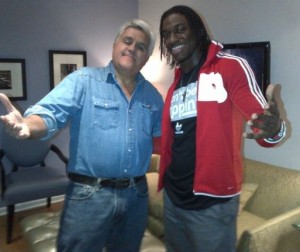