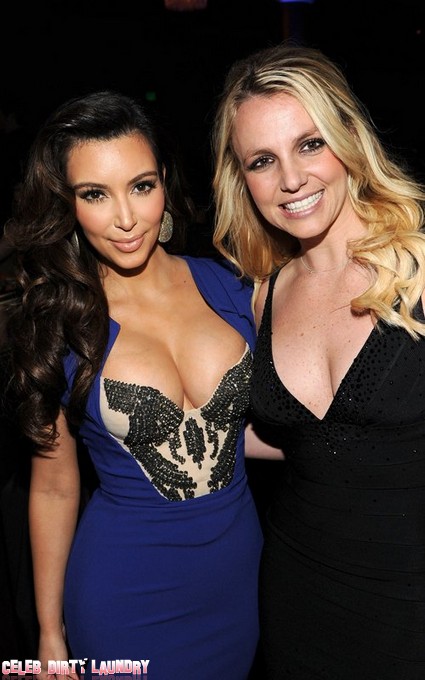 Kim Kardashian has further cemented her reputation as a fame whore. She gatecrashed the 2012 Pre-Grammy Gala at the Beverly Hilton last night. While Police searched the room upstairs where Whitney Houston had died only hours earlier …the reality TV star was posing for happy snaps with singers like Britney Spears. Why was Kim there? Good question. I don’t remember her ever being nominated or winning a Grammy.

The annual bash – hosted by music mogul Clive Davis – went ahead despite Whitney’s sudden passing in the same hotel that very afternoon. Her body was yet to be removed while the bash was happening downstairs. Britney was there with fiance Jason Trawick. Alicia Keys and husband Swizz Beatz were also in attendance as well as P Diddy, Adam Lambert, Kelly Rowland, Diana Ross and Toni Braxton.

The Pre-Grammy party is of course the precursor to the big event. The 54th annual Grammy Awards will be held at the Staples Center in Los Angeles tonight. Kanye West, Adele, Foo Fighters and Bruno Mars have multiple nominations for the industry’s highest achievement. Lady Gaga and Katy Perry are also in the running for several gongs. Adele will make her long awaited return to singing after throat surgery last year. You can also expect performances from Kelly Clarkson and Chris Brown.

Organisers are putting together a memorial to Whitney Houston. They’ve announced Jennifer Hudson and Chaka Khan will pay special tribute to the 48 year old who was no stranger to winning gramophones early on in her career.