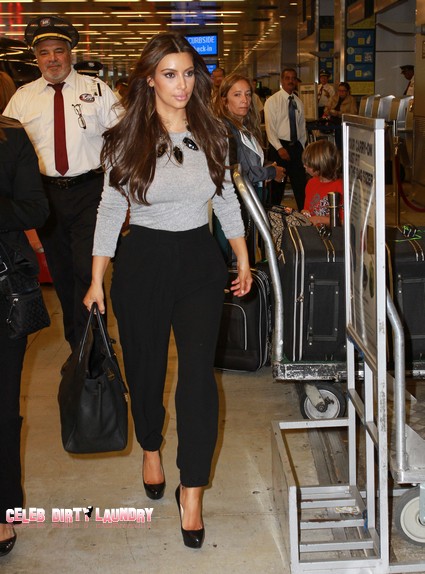 Now that Kim Kardashian is done with 72-day husband Kris Humphries she has moved romantically from the NBA back to the NFL. Kim has thrown a pass at New York Jets quarterback Mark Sanchez and he has apparently caught it. This is Kim’s second round with the NFL as she previously had a serious relationship with running back Reggie Bush. The Kimster has reportedly snagged herself a new victim in Sanchez and has been in super spy mode to avoid being seen with him in public.

According to a source for Starberryicecream.com:  “Kim and Mark like to meet in hotels for dinner dates and flings. Whenever Kim is in New York, they hang out. They are very careful with not being seen together, Mark is seeing someone! She has her hopes set on a bigger star than Sanchez. But for now, he will do.”

Kim’s D-A-S-H clothing store in Miami is apparently so darn popular they they need a larger premises so Kim flew down to scout new locations. The Miami location has become so successful, it can no longer cater to the massive flux of customers coming and going on a daily basis.

According to TMZ.com, Kim – who runs the fashion outlets with her sisters Kourtney and Khloe – is looking to double the size of the store in Florida.

And what does Kim have to say about her much publicized life:  “I really did some soul-searching, and I needed that. I needed to just be with the family. It’s been a hard couple of months. I really didn’t think that following my heart would create this much backlash.”

Who comes up with these lines for Kim? Can’t she afford a better and less florid writer. They make her sound like she is character in ‘Gone With Wind.’ I mean ‘following my heart?’ That famewhore follows only two things – and money is one – we’ll let you guess the other… .