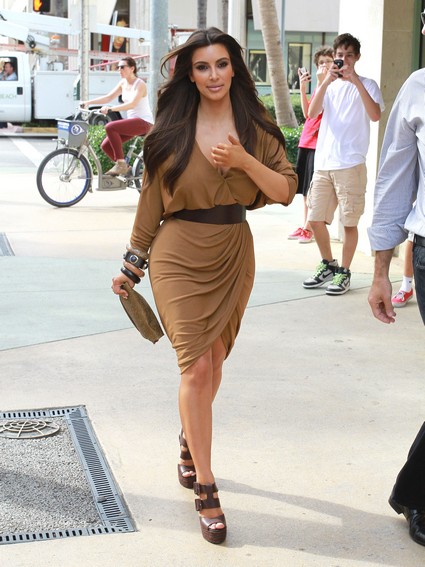 Kim Kardashian has another claim to fame and it is as the official owner of the World’s Best Bum. Perhaps P Diddy will want to add the Kimster to his ‘Culo’ picture book of lady’s behinds. Voted for by more than 2,000 readers of ZOO magazine, Kim ranked first in a top 20 that also featured Jessica Biel, Shakira, The Saturdays’ Frankie Sandford and new mother Beyonce Knowles, who gave birth to her first child, daughter Blue Ivy, just last month.

Kim also beat off stiff competition from the likes of Rihanna, Scarlett Johansson and Pixie Lott to bag the coveted title. However, despite causing a worldwide stir after she squeezed her buttocks into a curve-enhancing Sarah Burton for Alexander McQueen bridesmaids’ gown at last April’s royal wedding between her sister Catherine, Duchess of Cambridge, and Prince William, Pippa Middleton only managed to bag 36th place. Cheryl Cole was notably absent from the top 20, while Jennifer Lopez and Kylie Minogue’s famous derrieres only came in 22nd and 27th places respectively.

Damien McSorley, editor of ZOO magazine, said:  “Kim’s curves are famous the world over, so there could only ever really be one winner when it comes to the World’s Best Bum.  While we were surprised that Pippa Middleton didn’t make the top 10, it was good to see Pixie Lott flying the flag for Britain in the top five. But where was Cheryl?”

Guess it’s no surprise when the world’s biggest ass also has the best butt.