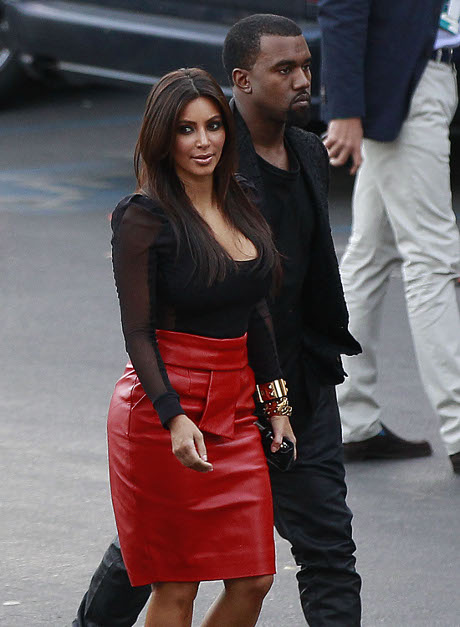 Is Kim Kardashian now thinking about employing her worldly talents to fuel the creation of a new album? According to sources, Kanye West says that he thinks Kim Kardashian can be the next Top 40 chart topper and that with his connections, his skillz, and his support he can turn her into a singing sensation. The National Enquirer, who reports this story with their mysterious source, says that he fully believes his “magical music touch can turn her into a singing star.”

Sigh. I don’t think Kanye West is that thick headed to think that Kim really is a singer. I mean, come on now. Kim had her try at the music world in 2011 and, as we sorely witnessed, nothing good came from that little endeavor.

The Enquirer reports: “[Kanye West] has booked two months for Kim at his Honolulu recording studio. He promised to write killer tunes for her and line her up with several of his producer pals” and he’s “also promised Kim that he’d bankroll the entire venture.”

Yikes. Something smells super fishy about this whole thing, and thankfully our good pals at Gossip Cop are here to save the day and tell us that this story is so incredibly . . . false! There’s not much to back up the magazine’s claims and, while the story isn’t exactly a far-fetched one, it seems as if a source close to the reality star says that the rumors are completely untrue. Kim Kardashian is not making a record. We repeat, Kim Kardashian is not recording an album. Yet.

Let us know in the comments section below if you’d like to hear Kim Kardashian give the music industry another try. I personally think she should stay away; she already dominates the world of reality television. She doesn’t need to invade the music world too. Right? Kim Kardashian and Kanye West have been together for a while now — you think this is one that’ll last?