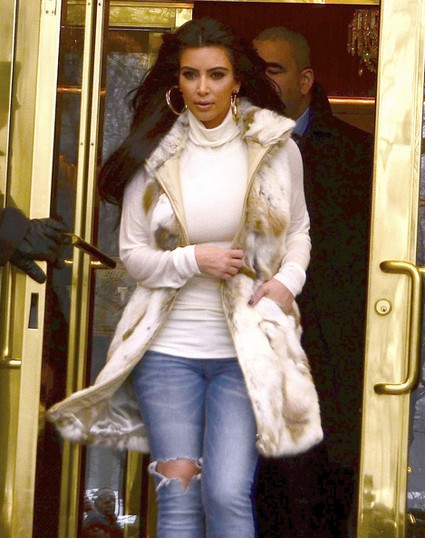 Kim Kardashian has arranged to get herself pushed right in the public eye once again. Amazingly, the talentless famewhore has won a role on a TV show that will see her appear for in several episodes – not a mere cameo role! I suppose the producers of ‘Drop Dead Diva’ figure that Kim’s notoriety will more than compensate for her obnoxious voice and plastic personality. We will see.

Kim will star in the fourth season of the drama-comedy ‘Drop Dead Diva‘ which stars Brooke D’Orsay as a lawyer whose body is inhabited by the soul of a dead supermodel – and will begin production next month.

Kim will have the role of Nikki, who is a love interest for Ben Feldman‘s alter-ego Fred, and her character is set to go into business with Stacy, who is played by former ‘Two and a Half Men’ stunner April Bowlby.

Kim wrote on her blog: “I am so excited to announce that I’ll be guest starring on ‘Drop Dead Diva’ this summer. I can’t wait to get to work with everyone on set!”

Josh Berman, the program’s creator and executive producer claims Kim’s “humour and passion” made her the right person for the role.

He went on with more lies: “In discussing the role of Nikki with her, I’m blown away by her smarts, sense of humor, and passion. This series is all about reinvention and I’m so excited to see Kim ‘reinvented’ in the world of ‘Drop Dead Diva.’“

How do you think legitimately talented actors feel about roles going to famewhores? It’s bad enough that Kim infests reality TV and the celebrity oriented media. It would be great to see her stay out of acting – her presence in any TV show or film calls into question the production’s legitimacy.