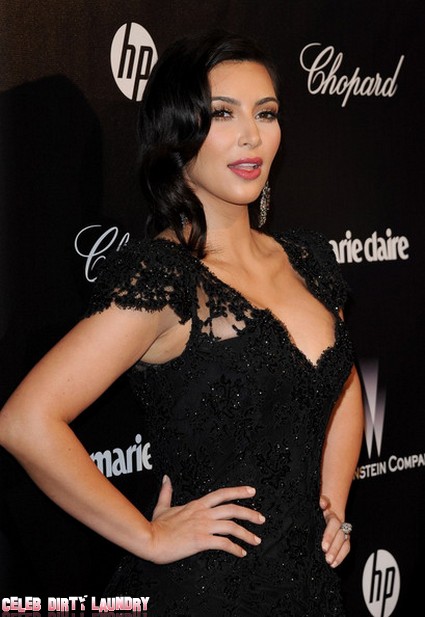 Ricky Gervais did not win any friends in the Kardashian/Jenner clan last night as he ridiculed Kim Kardashian in front of millions of TV viewers as well as Hollywood’s elite – Kris Humphries and his family were probably pleased with Gervais’ blast. Ricky compared Kim to Kate Middleton and of course Kim came out looking terrible.

Gervais insulted Kim by calling her a trashier version of Kate saying that she could be more easily bought.  He also laughed at her fake marriage and rapid divorce:

He said: “Arnold and Maria. J.Lo and Marc Anthony. Ashton and Demi. Kim Kardashian and some guy no one will ever remember. He wasn’t around long. Seventy-two days – a marriage that lasted 72 days. I’ve sat through longer James Cameron speeches.”

Apparently Kim was watching the whole thing and says she thought it was ‘hilarioius.’ Why do we not believe that?

According to TMZ  Kim is telling friends she gets the joke. As for joking about her 72-day marriage — that he’s sat through longer James Cameron acceptance speeches — Kim simply said, “Who cares.”

And when Ricky used Kim to explain how the Golden Globes were a little bit “drunker” than the Oscars … Kim said it was funny but inaccurate, because she hardly drinks.

Watching the show and hearing Gervais making fun of Kim – calling her out for what she is, a phony famewhore – was definitely the highlight of the broadcast.