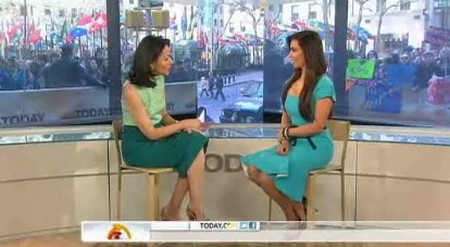 Kim Kardashian wasted no time in turning her sleepover with Kanye West into a media event by announcing on the Today Show that she has been seeing the rapper for years – as a friend of course.  Kim also alluded to a bright future for the new couple.  Who does Kim think she is fooling?  Are we supposed to believe that the first time she had sex with Kanye was at his apartment this week??

Host Ann Curry chatted with the Kimster about the PETA flour bomb incident, her nasty divorce proceedings and of course tried to get the dirt on Kim-Kanye-gate.

Kim of course played coy – as though she wasn’t a cheap famewhore – and told Ann that her life in the public has been less than satisfying lately.  Imagine that! Could this be related the bad press she has been justly receiving since dumping Kris Humphries after only 72 days of fake marriage?

When directly asked about Kanye’s new song ‘Theraflu” which is rumored to be about Kim and her date with Kanye she responded: “I’ve said it before, Kanye and I have been friends for years and you never know what the future holds and where it’ll take me. So—I like the song!”

TMZ reports:  Kim Kardashian is ALREADY talking about her blossoming relationship with Kanye West … telling the “Today” show she’s a big fan of his new song … even though he rips her ex-husband. .

A smiley, happy Kim sat down with Ann Curry this morning … and took on question after question about her new hook-up … to which Kim replied, “I completely respect and understand you have to ask these questions.”

Kim then explained she’s been friends with Kanye for years and is excited for what the future holds for them.

Kim states that she and ‘Kanye have been friends for years’… friends with benefits we presume?