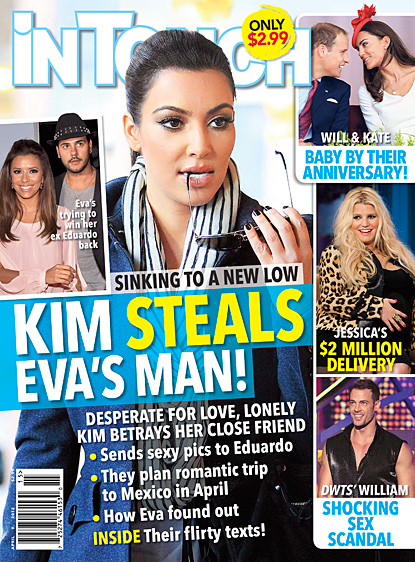 Kim Kardashian has stolen Eva Longoria’s boyfriend, Eduardo Cruz by the use of SEXting.  It seems Kim is the reason that Eva and Penelope Cruz’s younger brother Eduardo broke up after a relationship lasting over a year.  Kim cunningly used her tricky technique of emailing Eduardo hot sexy nude pics of herself and Eva discovered them!

This week’s issue of In Touch features a cover revealing Kim’s shocking sexploits!  Kim was so desperate for love that she betrayed Eva who was her close friend.  In fact Kim and Eduardo are now planning a romantic getaway to Mexico.  Even worse is that Eva discovered the explicit photos and flirty texts that Kim sent to her former boyfriend.

Kim is using a severely damaged moral compass to guide her behavior when it comes to her relationships with men.  She has slept around so much that it is suspected that she has herpes and that Kourtney’s son Mason could be at risk of catching it from her.

The best thing that Kim could do no would be to stay quite… for the next year or two.  She has trashed her reputation so badly that no news about her can be good news at this point.

In this April 9 issue of In Touch we will also learn about the following amazing stories:  Jessica Simpson’s $2,000,000 delivery – this should be no trouble for Jessica who is rumored to have a fashion empire with an estimated value of over 1 billion dollars.

The mag also hints at a baby for Prince William and Kate Middleton by their anniversary which is coming up next month.  Obviously we are all anxious for Kate to get with child but we will need to wait for the announcement – it is unlikely that In Touch has a direct line to the future King of England and his wife!

More likely to be true is the shocking sex scandal hinted at on DWTS – this one involving studly William Levy!

I’ll be getting my issue of In Touch as soon as it hits the stands – what about you?