Kim Kardashian Was Destroyed By Her Mother Kris Jenner (Photo) 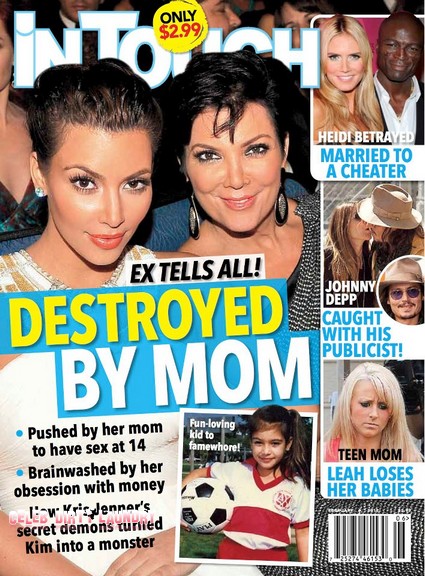 The current issue of In Touch Weekly features the cover story ‘Ex Tells All – Destroyed by  Mom.’  Yikes this is the best magazine cover this week – most of the other are either Heidi and Seal or recycled news.  In Touch is claiming that they have information from Kim Kardashian’s ex boyfriend that Kris Jenner is the one who destroyed Kim.

The magazine wants us to believe that Kim was a fun-loving kid until Kris got her hands on her and made her a famewhore.  They go on to claim that Kris pushed Kim to have sex at the young age of 14.  That she brainwashed her and made her obsessed with money.  Furthermore they know how Kris’ secret demons turned Kim into a monster.  So there you have the story!  Do you buy it?  Sound out in the comments below.

It has been rumored that Mom Kris is the reason that Kim filed for divorce so soon from her husband Kris Humphries.  Apparently Mama Jenner did not think Kris was good enough for Kim and wanted her to snag an A lister.

Of course just like you can’t make a silk purse from a sow’s ear we don’t accept that all that we despise in Kim is her Moms work.  To behave like such a bitch Kim shows that the evil seeds were already in her and Mom only needed to water them!