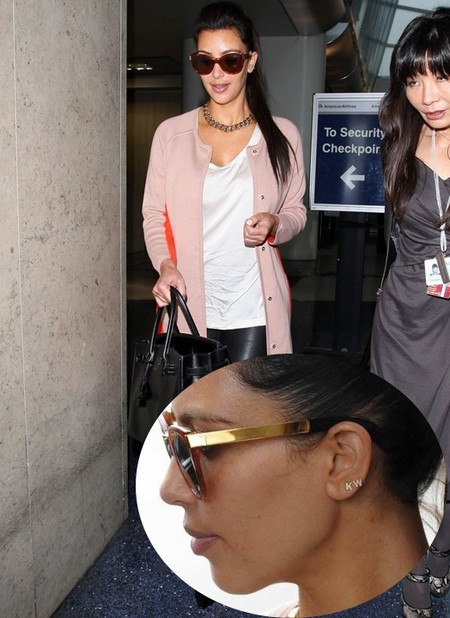 Kim Kardashian is really serious about her new boyfriend Kayne West!  And how do we know – well Kim was photographed proudly wearing yellow gold and diamond earrings with the initials K.W. – what a romantic couple.  Ever since the Kimster was spotted crawling out of Kanye’s apartment in NYC after an all-night date the media has been waiting for every bit of news about the couple like a hungry pack of dogs at a garbage dump.

Could this finally be true love for Kim?  Will she be able to remain faithful to Kanye, after all Kim has never been a one man woman, has she?  Of course the star power of Kanye probably exceeds her own – certainly his income does – and this might just be the key to Kim’s hard heart.

Kanye will have to play ball with the Kardashian reality TV network to keep the rest of the family happy, especially Kim’s pimp momanager from hell, Kris Jenner.  But Kanye is also a total famewhore and so things might just work out perfectly.  We will be watching and reporting on all the public and private doings of Hollywood’s latest and greatest couple!

Kim arrived at LAX this weekend sporting 2 yellow gold and diamond earrings in each one of her ears — a K and a W — which obviously stands for Kanye West.

The two have only been dating for a few weeks … but it seems they’re moving pretty fast. They’ve already been on multiple dates, had ice cream together and Kanye even wrote a rap song dissing Kim’s ex.

Kim and Kanye – lively and lovely!  What do you think?  Let us know in the comments below.