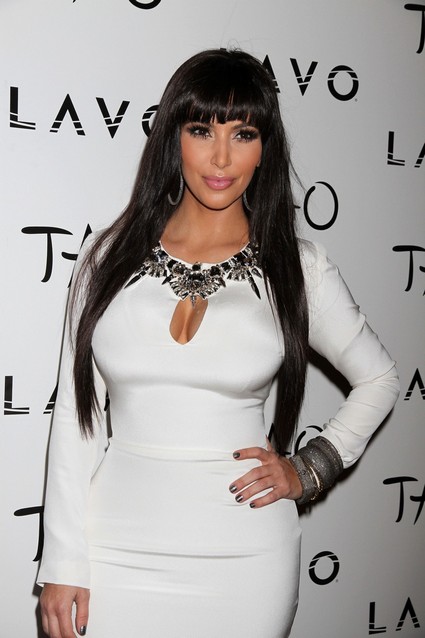 You know a relationship is over when your significant other asks “Do your boobs need to be that out?” when you are both all alone!  Well, that is exactly what Kris Humphries says to Kim Kardashian in the next episode of Kourtney and Kim Take New York. This marriage was so over, before it ever began – it’s so obvious they both were never really attracted to each other. Not only does her cleavage not impress the NBA star, but when he pats her on the head, she tries to duck down – obviously repulsed by his touch. Did Kris think the cleavage was actually for him? Women like Kim who are so desperate for attention show cleavage and pose nude in playboy as well!

Kim gets upset when she doesn’t get advance notice that Kris`s sister, Kaela, is coming to visit. She can`t stand it when she is not in control – she`s not looking for a partner, she`s looking for someone she can totally control like her step-dad Bruce Jenner who will sit, stay or come on demand for her mother, Kris Jenner. Well, Kris Humphries is not that kind of guy and he’s not afraid to tell Kim, “I live here, too, I don’t need to get permission to do stuff.” I can well imagine that Kim probably had thoughts of strangling Kris at that very moment – but she wouldn’t dare do anything to make herself look bad with the cameras rolling, we got that sweet and ‘oh so fake’ smile instead.

After Kim considers all the “me” time she needs in her upcoming week, she declares that she may not have any left for her sister-in-law, with which Kris replies, “Maybe take the 10 minutes you spend with me and spend it with her instead.” Wow, that really sums up their relationship, I’m surprised it lasted 72-days!

It is so obvious that Kim is a self-centered bitch and a control freak, they are editing this show to make Kris look bad, but it is back firing by showing the viewers exactly what who Kim really is. I am simply left with one question, was the marriage ever consummated?…..

Yeah, I didn’t think so either.

Did you see last week’s episode of Kourtney & Kim Take New York when Kim finally made up with her sister Khloe? If not, you can get all the details HERE and come back tomorrow night for the official recap when we will be blogging LIVE the next episode of Kim & Kourtney Take New York, “Voices From Beyond”.