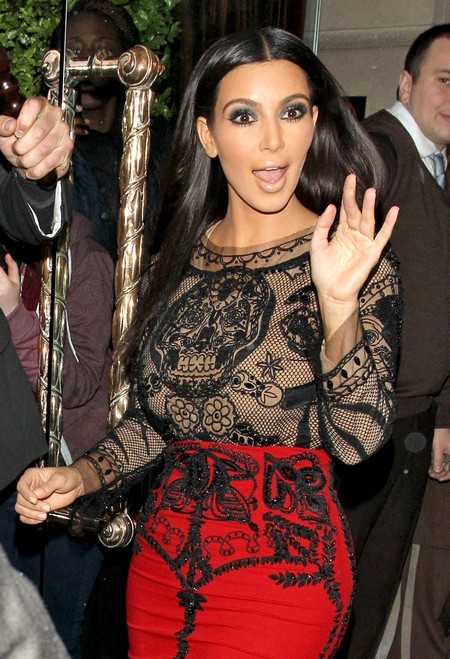 Kim Kardashian is  jealous and pulling a hissy fit.  Kim does not want Kanye West backstage with women while he is on tour.  Kanye has always worn the pants in his various flirtations and relationships, but not this time around.

After lusting after Kim Kardashian for years he seems to be having no problem letting her call the shots.  Sources say she has been ordering him around since arriving in the UK and now she has set her sights on banning women from joining Kanye backstage as he tours with Jay-Z.

“Kanye has a load of girls he’s friends with. Most are stylists or from the fashion set but Kim’s not happy about them being alone with him backstage. She sees how well he gets on with girls because of his sensitive side and has decided to rein in the entourage a bit.  Kim is trying to put a stop to this as she doesn’t want to look or feel awkward at any point.”

Apparently jealous Kim intends to be with Kanye for the entire Watch the Throne ten-date UK tour and even has her own private area backstage.

“She realizes he will need to do his thing with Jay-Z and the rest of the crew but she’ll have somewhere for her and her pals to hang out.” says a source.

On the one hand it’s hard to believe these two are really dating.  It looks like a huge publicity stunt by two publicity whores.  Then on the other hand, they really might be perfectly matched.  Are you buying this couple as a love match?  Tell us in the comments below!