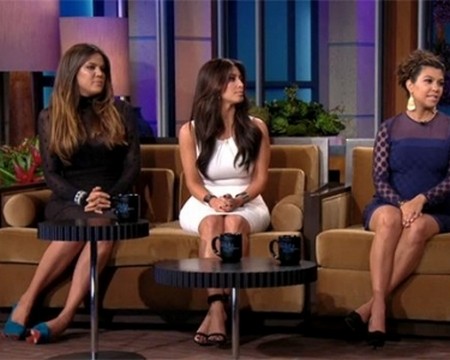 Never ones to shy away from the spotlight, the three eldest Kardashian sisters – aka the most famous of the bunch – dropped in to visit talk show host Jay Leno on The Tonight Show last night.

Kim, Kourtney, and Khloe were on top performance gushing about everything and anything currently going on in their (non) famous lives.  Kourtney, the eldest of the three, is expecting her second child in two months, a little baby girl to join big brother Mason.  When asked by Jay if she was going to share the birthing video to the world as she did with Mason, she admitted that it depended on the actual birth.

“I don’t know, we’re gonna film it again ourselves, and honestly, my experience last time was so peaceful and calm and everything you don’t see in the movies. And I really wanted to share that with people so they knew it doesn’t have to be a crazy screaming session.”

Fair enough. But I don’t know if I’d be wanting complete strangers to watch my delivery.. that being said, it was pretty crazy to watch the first time!

The big pending question from Jay was obviously directed towards Kim and her ‘relationship’ with rapper Kanye West.  When asked if his new song “Theraflu” was written for Kim, Khloe piped in saying it was “pretty self-explanatory” and obviously about her.  Kim, for her part, kept mum saying she “didn’t think it was for me.”  Right – playing it coy are we Kimmy?

The girls were also there to promote the seventh season of Keeping Up With the Kardashians, which premieres Sunday at 9 pm on E!  Fans can be sure to expect lots of drama – what would the show be without it?  And boy, do I always eat it up.  I’ll be watching Sunday; you can pretty much guarantee that.