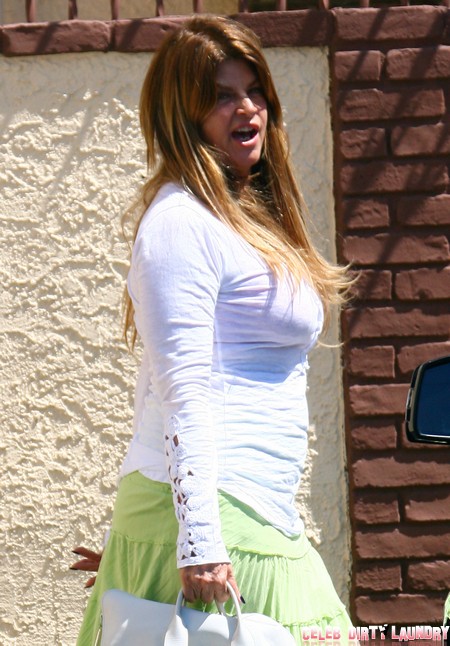 Scientologist and ‘Size 4’ crazy Kirstie Alley has been in New York for Fashion Week – because we all know Alley can fit in those designer threads. While there, Alley gave a interview with Entertainment Tonight and thought it would be a good idea to stir up the pot and talk about Vanity Fair’s article on the allegations of her cult religion, Scientology, and of course, Tom Cruise.

“I think whenever you have articles written that are third and fourth parties opinions – it’s like the game Gossip and you don’t get the truth – I think that a magazine of that caliber should have interviewed him, and then they would get the truth.” Really? Getting the truth out of Tom Cruise is like pulling teeth. I’m sure no one will ever know the inner workings of that man’s twisted psyche. But regardless Alley didn’t stop at that and continued with this “I think that probably all religions sound bizarre to the people who are not the practitioners of them…to me it’s so normal, and probably 90% of the crazy stuff I hear isn’t true.”

Oh, that’s why Scientologist believe in a disconnection theory in which members are encouraged to cut off all ties with their family and friends, which definitely seemed to be the case of Cruise and Nicole Kidman’s two children, Isabella Cruise and Connor Cruise. After Kidman and Cruise divorced, she was labeled a Suppressive Person, a spiritually toxic person to be avoided and with members of the Church quietly instilling this idea into the kids, sources claimed to Vanity Fair.

With all that being said, I can’t really knock Alley, she has been a member of this cult far too long and has been brainwashed to believe what she thinks is right and all else is wrong. Let’s hope Alley doesn’t run into poor Katie Holmes while in New York since her fashion label, Holmes and Yang, was showing earlier in the week. I don’t even know how that would go down.