Koala-Gate: One Direction Kissed A Koala And Fear Chlamydia 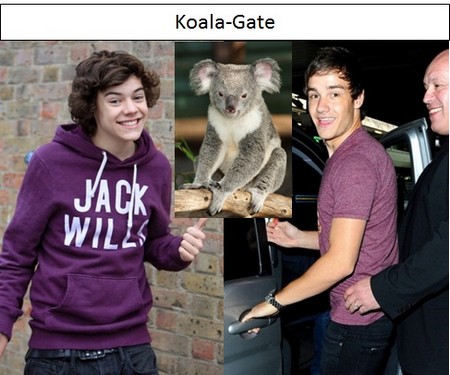 One Direction decided to do the Koala tour while in Australia and had a close encounter of the worse kind with a possibly diseased Koala.  A Koala urinating on you doesn’t sound all that great, in fact having any type of creature urinate on you doesn’t sound good at all. Koala’s relieving themselves on you can in fact put you at risk of getting Chlamydia, as 80% of the breed are infected with it; it is an STD whose effects include severe pink eye, incontinence, prostatitis and kidney damage.

‘One Direction’ was touring in Australia and New Zealand and during their visit Liam Payne and Harry Styles cuddled with 3 year old Kat the Koala. During the cuddling session with Kat, the koala went to the bathroom on both of them and the band members are now simply terrified that they will catch chlamydia.

Koalas are suffering from chlamydia so bad that the animals no longer have the energy to survive and suffer from urinary tract infections which impair their reproductive system. The situation is so dire that experts fear the koala may actually become extinct in a few decades if the animals are not vaccinated with a cure.

Lucky for ‘One Direction’, transmission of Chlamydia to humans by Koala’s is very rare.  But it is possible and could be difficult to cure.  Do you think One Direction should be more careful on their next tour?  Let us know in the comments below.